One of the things about having OCD is that I notice coincidences, anomalies, things that might defy the odds.   When I first decided to put together my frankenset, I haphazardly went through my doubles boxes grabbing Angels and putting them in a box in numerical order.  When I came to number 147, I noticed a coincidence (okay so anybody would have caught it.  Whatever).

My two choices for #147 in the frankenset were:

Two of the 5 major card companies gave the same player the same card number in the same year.   What are the odds of that?  Score just missed making it a trifecta:

Just 6 off.  Fleer and Donruss declined to offer up Buice cards in 1989.

The Upper Deck card.  After all, it was Buice who was instrumental in getting Upper Deck into the baseball card business.
Posted by Jeff at 2:19 PM No comments:

Angels, Angels, and even more Angels

I'm pretty sure that anybody who reads baseball card blogs has come across the Dime Boxes blog, but if they haven't, they need to.  Nick has a way of connecting with cardboard of all types and enjoying the cards on their own terms.

Recently I saw a post he wrote and inquired about a card I needed to have wanted to get.  I sent along a couple blue and red parallels and a stack of the blurriest 1982 Fleer I could find.  What I got back was way more than I could have expected (which is quickly becoming a running theme for me). 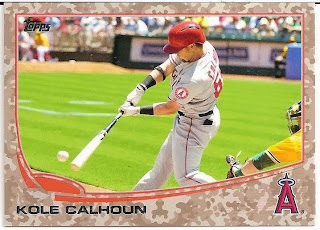 This is the card I asked about.   I would have been happy with this card alone.  An Angels blogger, who I know has seen more Angel ball than I have lately, has opined that this kid has the enthusiasm that the rest team could use more of.  So I've started a player collection.  This camo version will go next to the base card and the gold parallel I have.  I only need 45 more for the rainbow (I kid...sorta.  There's 14 total I think.  14!?!)

But Nick decided to throw in a stack of Angels.  Over 50 more Angels.  I'll show some of the highlights.

Player collection needs!  There's a Rod Carew card from his playing days.  I thought I had all those except his rookie card, and assorted OPeeChee cards.  And a Tim Salmon to add to one of my more recent player collections.  But that Bobby Grich is possibly my favorite card of the package.  Underrated player, and he doesn't seem to get much love from Topps in their recent binge of "old players on new cardboard". 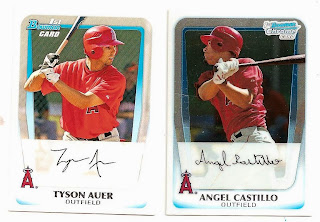 Gold parallels, and sparkly parallel.  I'm a sucker for all the parallels I've seen the last couple of years.  Sure, Topps is beating a dead horse, and the dead donkey next to it, by overdoing parallels.  But I still like them.

I have considered starting a Gary DiSarcina player collection.  He was the real reason the Angels collapsed in 1995.  He was hitting .307 in the 9 hole and made the All Star Game in 1995.  Then he gets hurt on August 3rd, missing a month and a half, and the Angels went in the tank.  The Percival and Velarde bring my grand total of 1997 Topps to two (edit - grand total of three.  There was a third one in the package).

And here's the guy the Angels let go so they could sign Josh Hamilton.  So they could pay 5 times as much for less production.  So they could sign a guy with a checkered past and ongoing recovery instead of a clubhouse leader.  (Don't get me wrong, I'm not bashing anybody in recovery and definitely not the process itself.   I'm lamenting the presence of the man that got away).

One of the perks about having this here little blog is that I get to pretend I'm a blogger.

In my new self-titled role of blogger, I headed over to the 2X3 heroes blog and signed up for Club PWE.  Sure enough, I got a PWE filled with Angels the other day.  Ironically it was the day after a post detailing how Jeff from 2X3 and I had sent the same card to Night Owl. 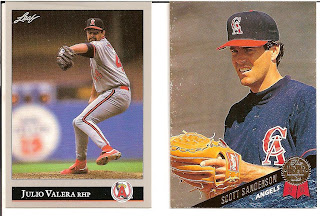 I got cards from just after I stopped collecting cards.  I'm not even sure I knew about Leaf when I was still collecting.  Nowadays, thanks to a Craig's lister from 10 years ago, I have a bunch of 1991 Leaf, but that Sanderson is definitely an addition to my Angels cards.

I also got some cards from when I was not collecting at all.  Any cards I have from the 2000s I have gotten from re-packs or from generous bloggers like Jeff here.  Erstad and Molina were both products of the farm system and key contributors to the Angels only World Series champions.  Guerrero on the other hand is (in my humble opinion) indirectly responsible for the mess the Angels are in right now.  He was a great signing for Arte and won an MVP.  But that has led to the Angels signing more free agents who haven't been as good, which in turn is weakening  the farm system..... 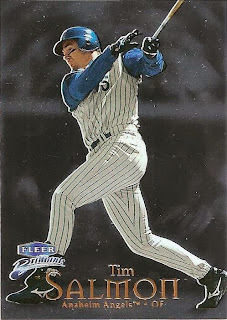 The best card for me in the PWE was this Tim Salmon, which will find a good home in my Salmon PC.  This is from one of the 14 million sets Fleer produced in 1999 (exaggeration I know.  I collected in the 80's when there was three sets and we liked it).  But its a pretty sharp looking card. 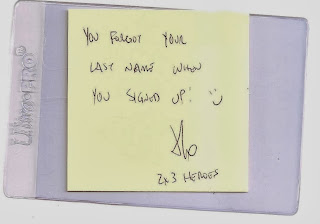