Probably can't tell from the amount of blog posts coming forth, but still alive here in the land of Junk Wax.

In fact, still receiving cards from the generous blogosphere.  T.J., the Junior Junkie, recently sent me this stack of cardboard goodness: 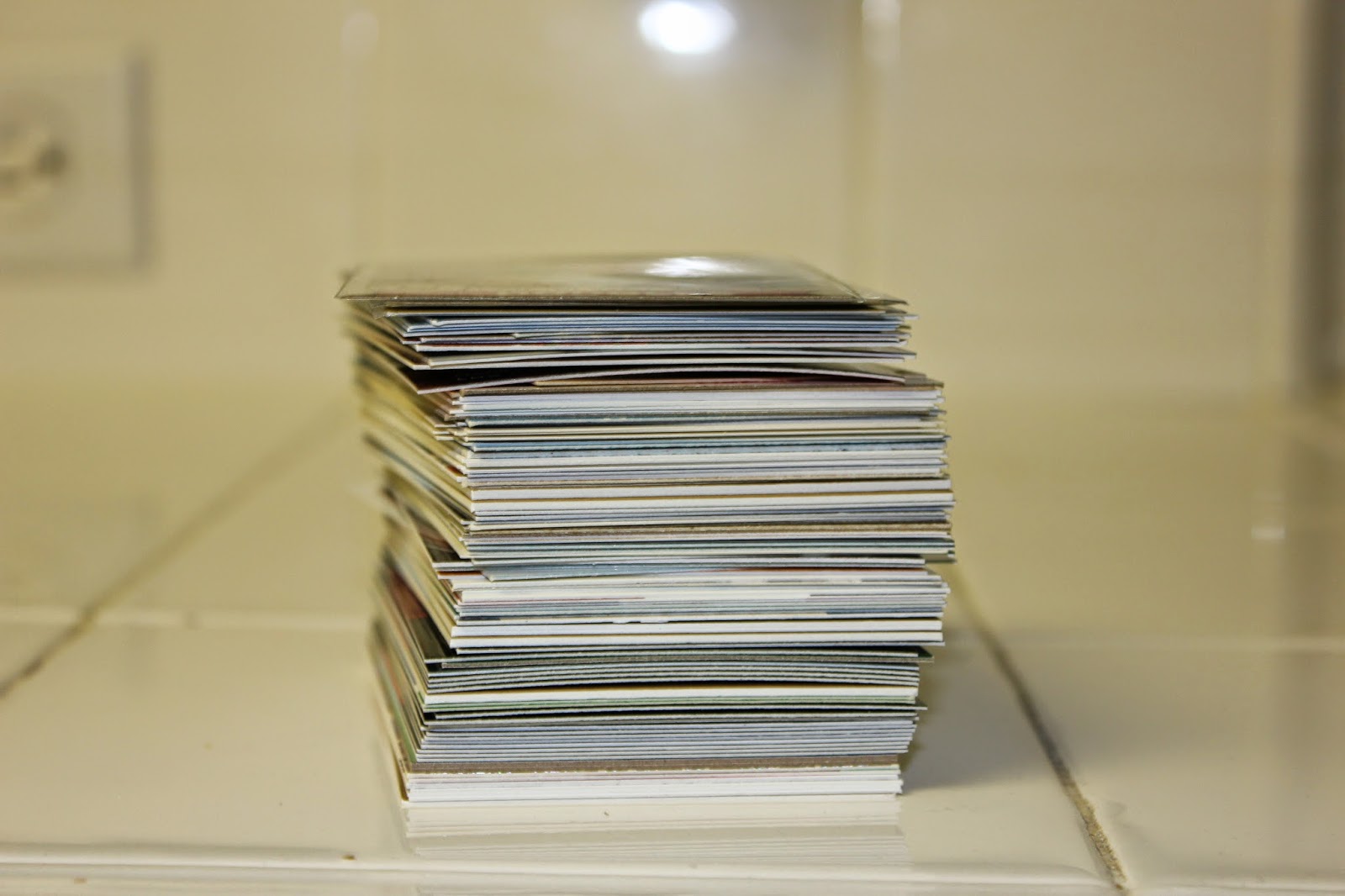 I was thinking wow, what did I do to deserve that??  Then I saw this: 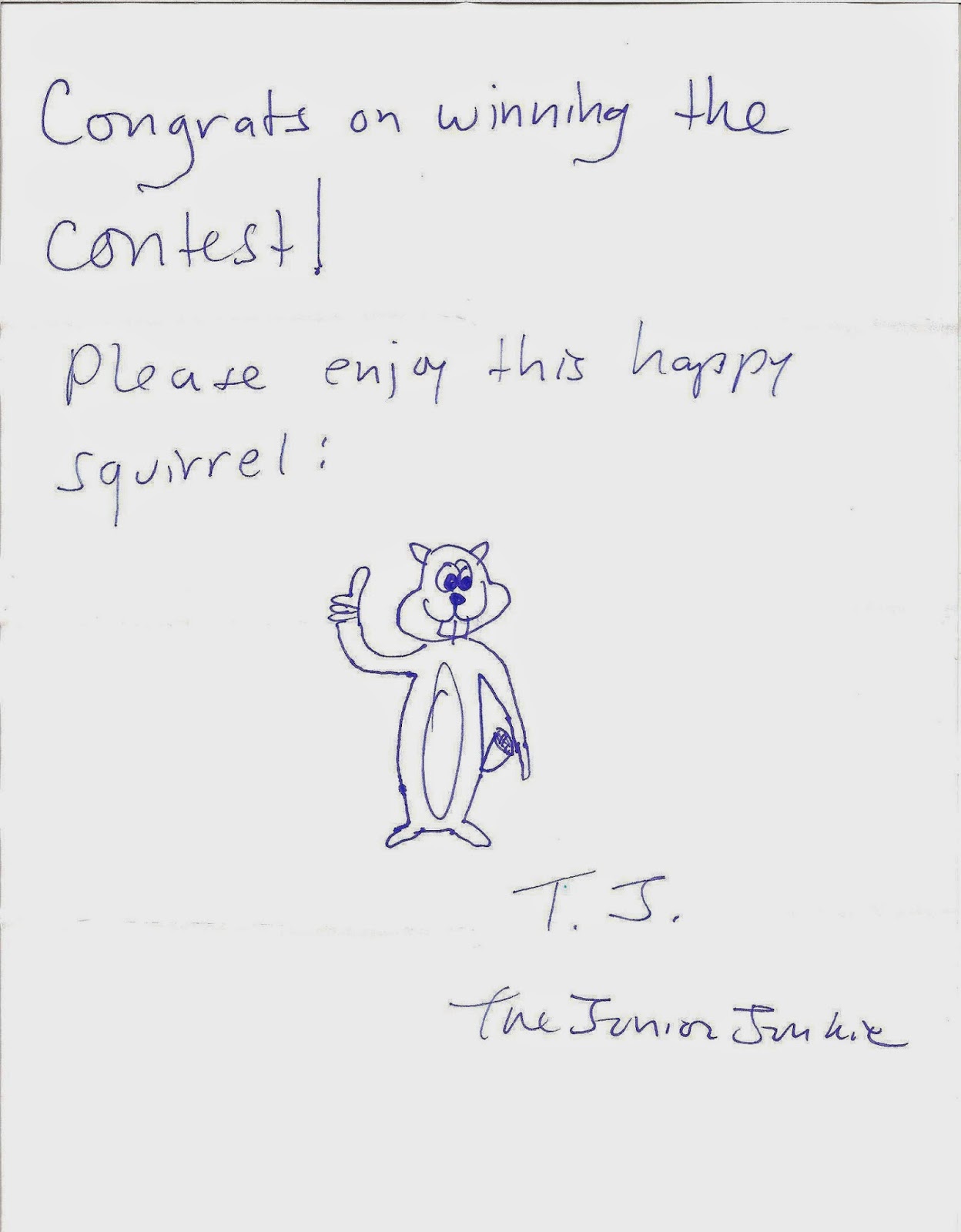 Wait. What contest??  If you're like me, you read alot of blogs. And comment on a lot of blogs.  And forget about your comments.  Sure enough, I entered a contest on Junkie's blog.  When I guess random numbers in a situation like that, I usually try to go with some number that has meaning to me.  This time I went with Rod Carew's jersey number.  So thank you Rodney Cline.  Sad thing is, I somehow totally missed the results post.  I'll blame the new job/schedule.

I can't possibly do the package justice and post all the goodness in that stack, but I'll try to highlight a portion of it.

I'm still trying to complete 1979 Topps, and these cards are definite needs there.  Ironic that Welch arrived not too long after his early passing.  I just realized that's 2 Dodgers.  Oh well, I want them anyway! 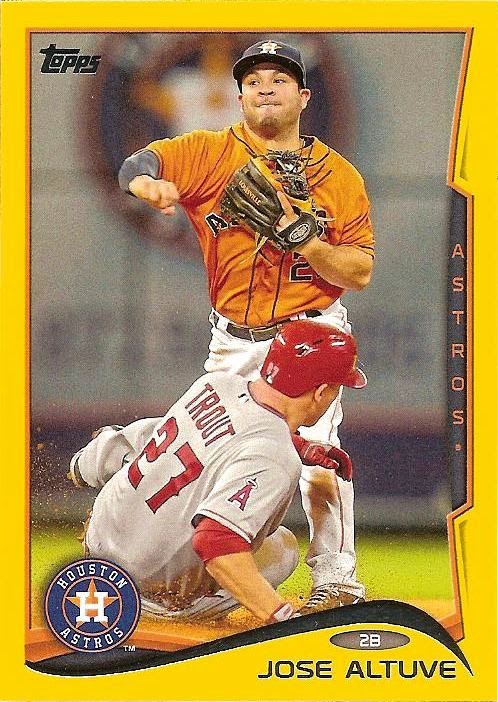 T.J. was paying attention to my little attempt at a rainbow.  This Mike Trout brings me up to 8 of the parallels: 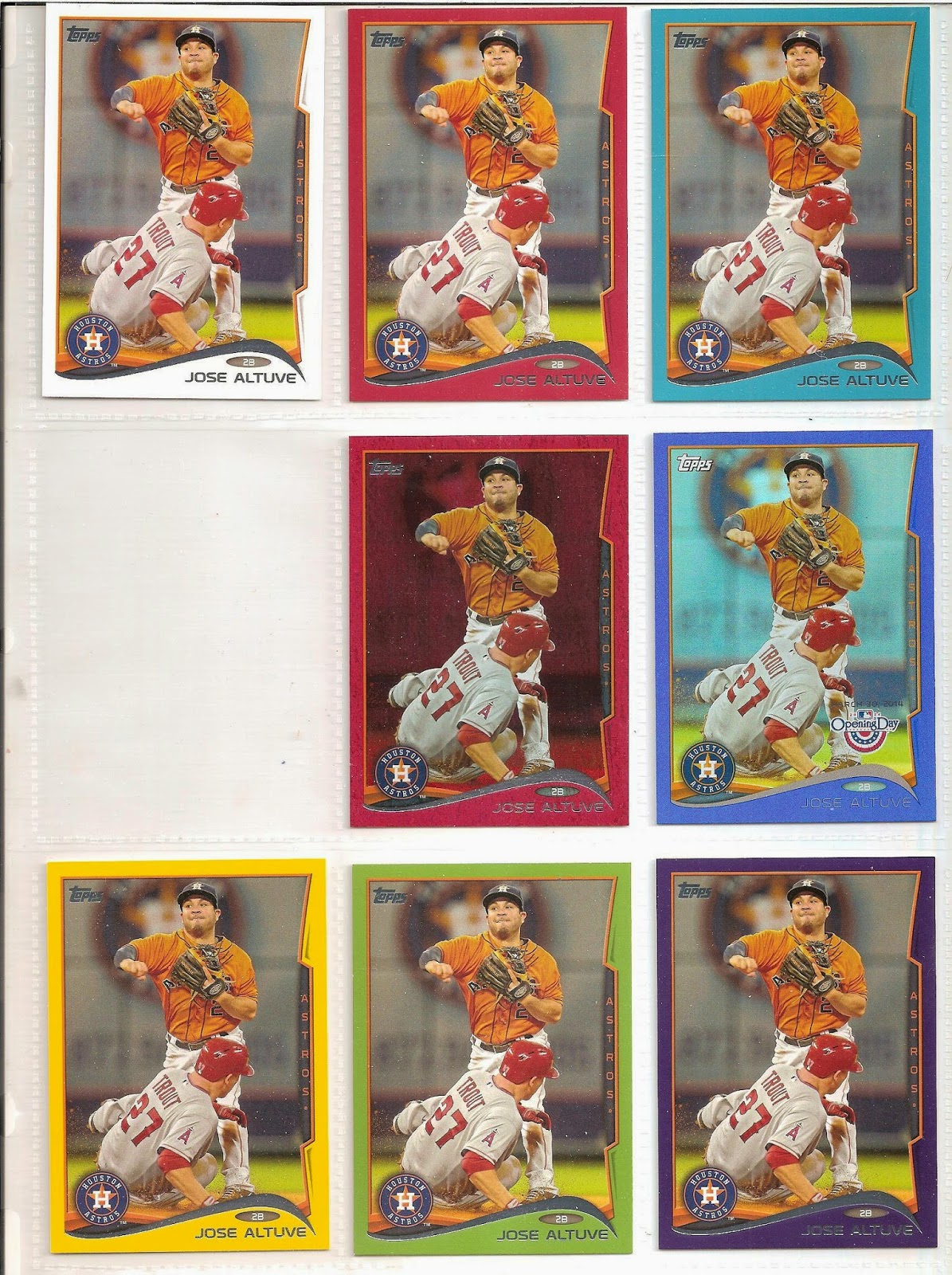 Trout is also on the first card of the base set, but the only variations I have of that card are the base and OD cards.  This is a much cheaper rainbow Trout.

The rest of the package were cards of my beloved Angels.

Both of those regular sized cards go in my Topps Angels binder.  I'd like to get all the Topps base cards 1961-present in there, and these are both needs for that binder.  I didn't appreciate the minis when they came out in the 80's, but I like the Angel versions now.

2006 Bartolo and 2007 Kelvim both go in the same binder.  2007 Bartolo was already in the Topps binder, but he goes into slot 516 in my Angels frankenset.  The frankenset hasn't gotten alot of love lately, but I'm still putting cards in there. 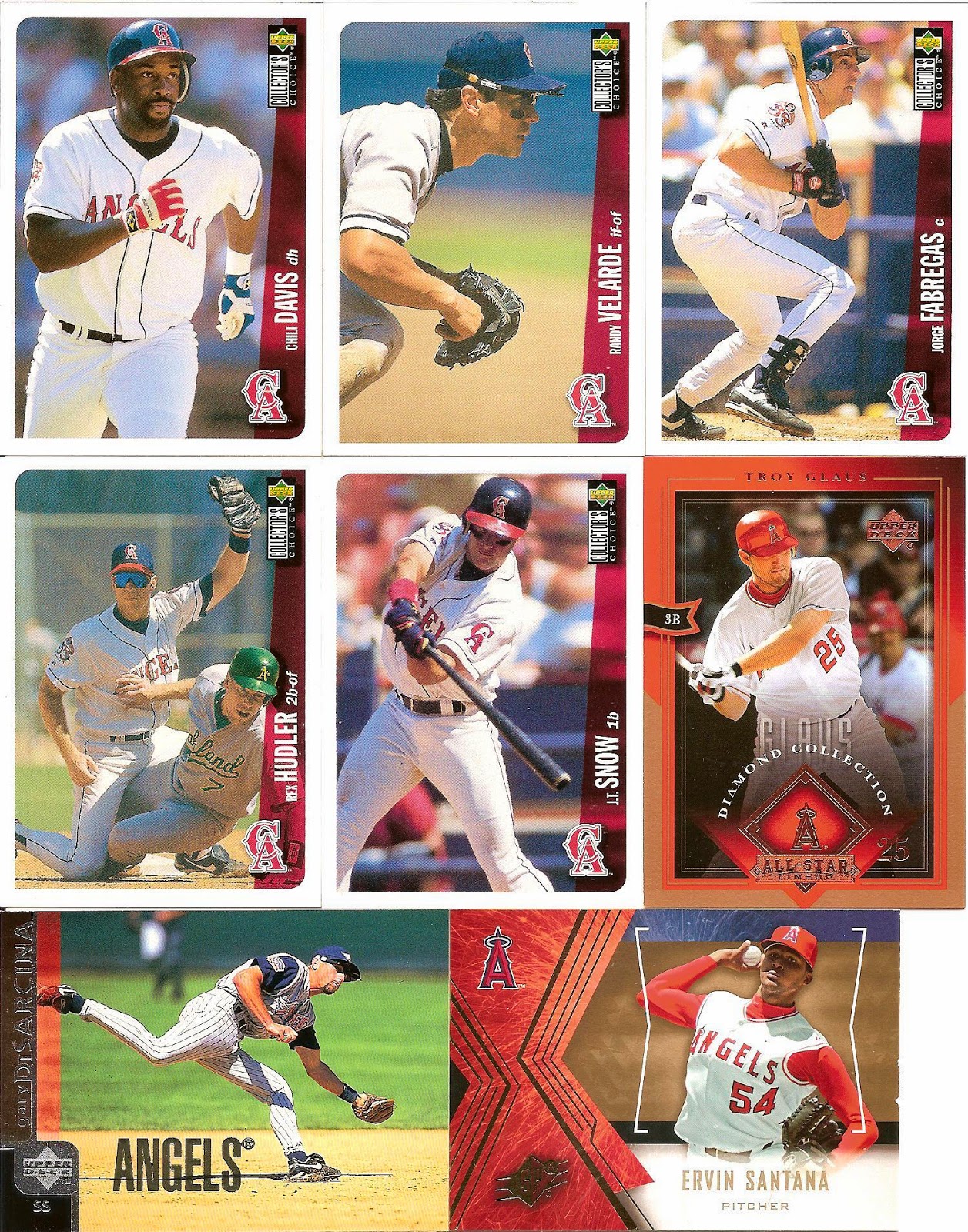 Upper Deck from my time away for the hobby.  I particularly like the Hudler card.  I pretended to be a second baseman when I played baseball.  And those first 5 feature my favorite Angel logo.  Gary DiSarcina there is wearing my least favorite of the Angel logo/color scheme/uniforms.  I may have to start a DiSarcina PC someday.  He's back with the Angels, this year as 3rd base coach.

Bowman and the prospects.  I had never heard of Josh Shaffer.  He never made it above A ball in the Angels' chain and was in the White Sox organization in 2002.  Alfredo Amezaga is still playing today.  He's with the Mexican League's Tigres de Quintana Roo. 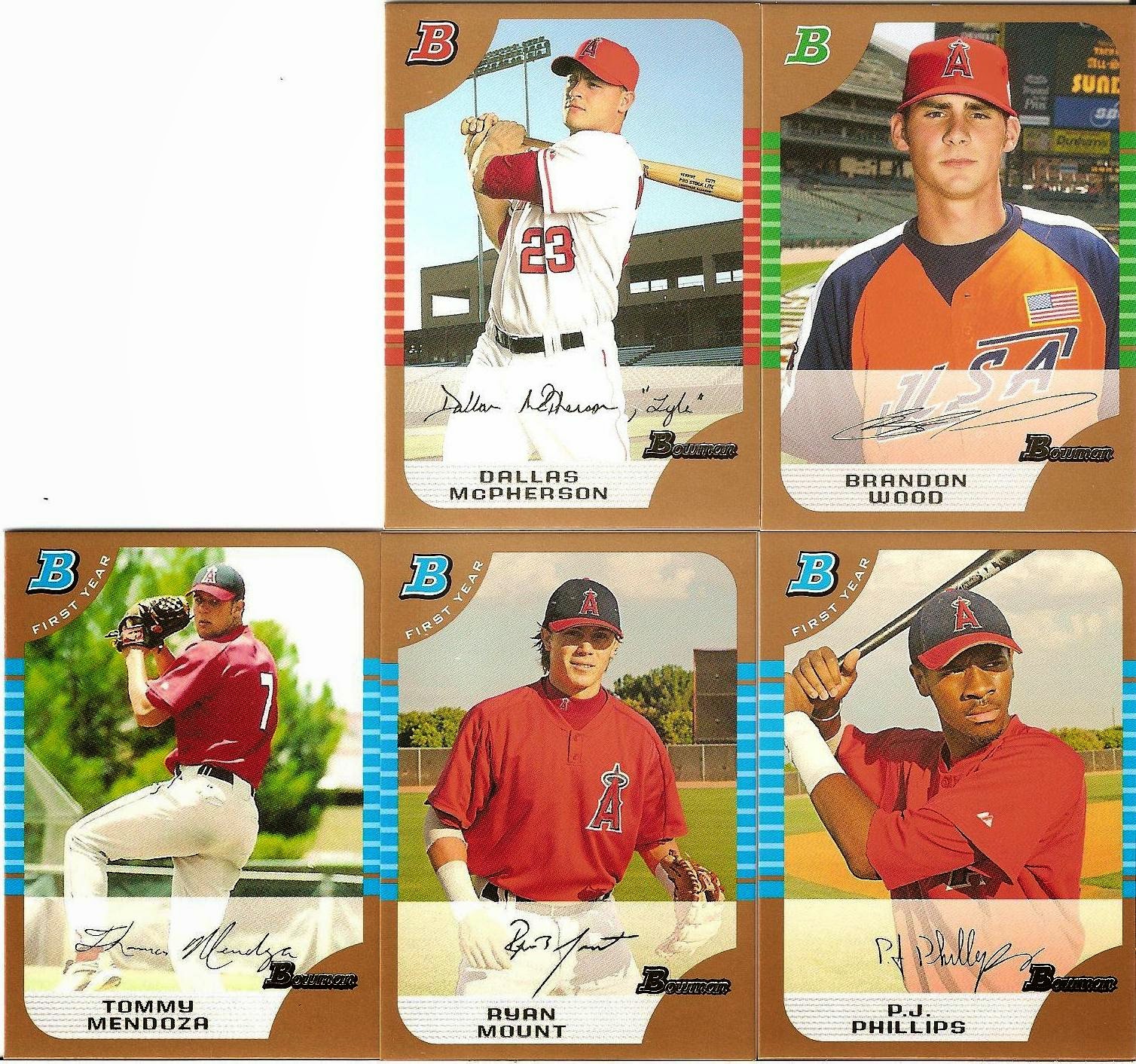 These are (I think) the gold parallels of 2005 Bowman Draft Picks & Prospects.  So why do some cards have 2004 stat lines on the back, while others have 2005 stat lines?  Anyway, these things are super thick, which is kinda cool.  But kinda odd too. 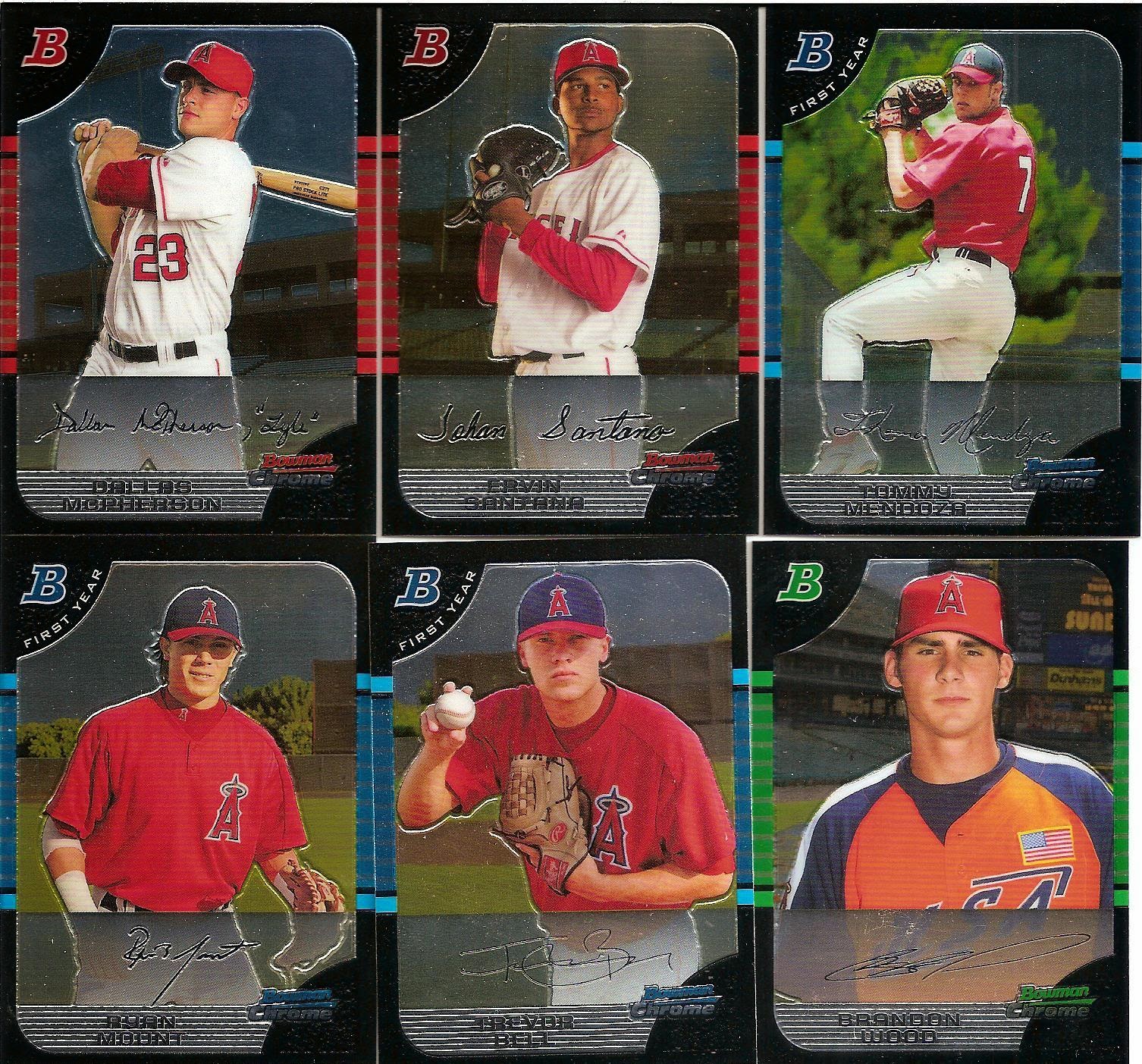 And these would be the Chromy versions of the same cards.  They're much brighter in person.

And a little oddballness to finish off the post.  The Polonia on the left is much harder to see in person than in the scan.  And it highlights a Grand Slam he hit.  Polonia and power??   I bought a couple packs of the Triple play at the Dollar Store, but I hadn't gotten Trumbo in any of them.  There's Dallas McPherson again.  He led the minors in homers a couple of times, but never really stuck at 3rd for the Halos.  Jeff DaVanon's dad played in the majors.  Their career were exactly 30 years apart.  1969-1977 for dad, 1999-2007 for son.

And that doesn't cover half of the package.  Thanks again T.J.

I think I'm one of the few people that can say I have Junior cards that the Junkie doesn't.  I'll have to remedy that here soon.
Posted by Jeff at 10:32 AM 1 comment: 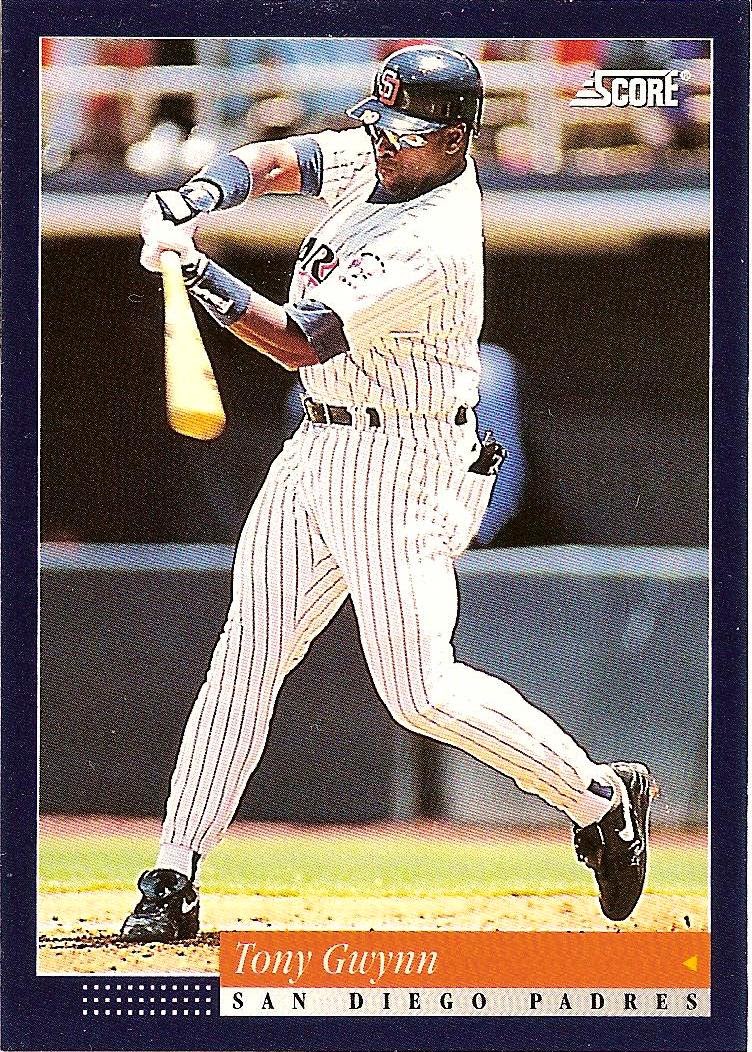 When did I become Grumpy Old Man?

So I went into the red parallel store and got my first taste of Series 2.  I bought a hanger box nd a rack pack.  108 cards should whet my appetite no? 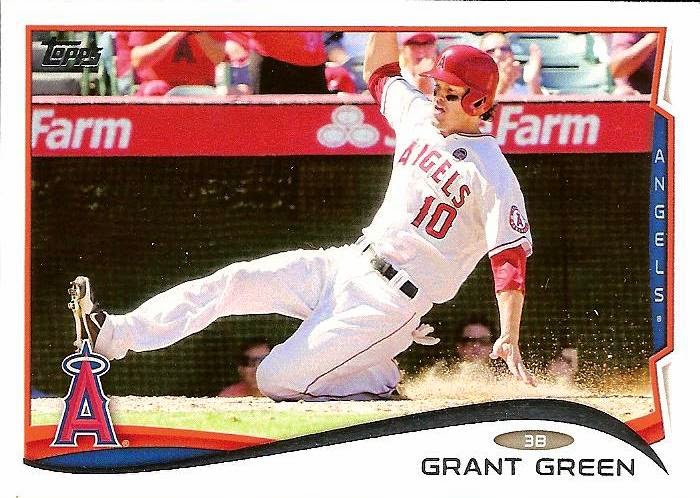 This is probably my favorite card of the bunch.  Not just because he's an Angel.  Not just because I've seen him play here in Sacramento (and taken a couple of pictures of his).  Just a good looking card to me.  Even if it is horizontal.

Oh!  I just realized there's only 8 Angels in Series 2.  And that includes Mike Trout, who's in Series 1.  Gotta make room for more Yankees I bet. 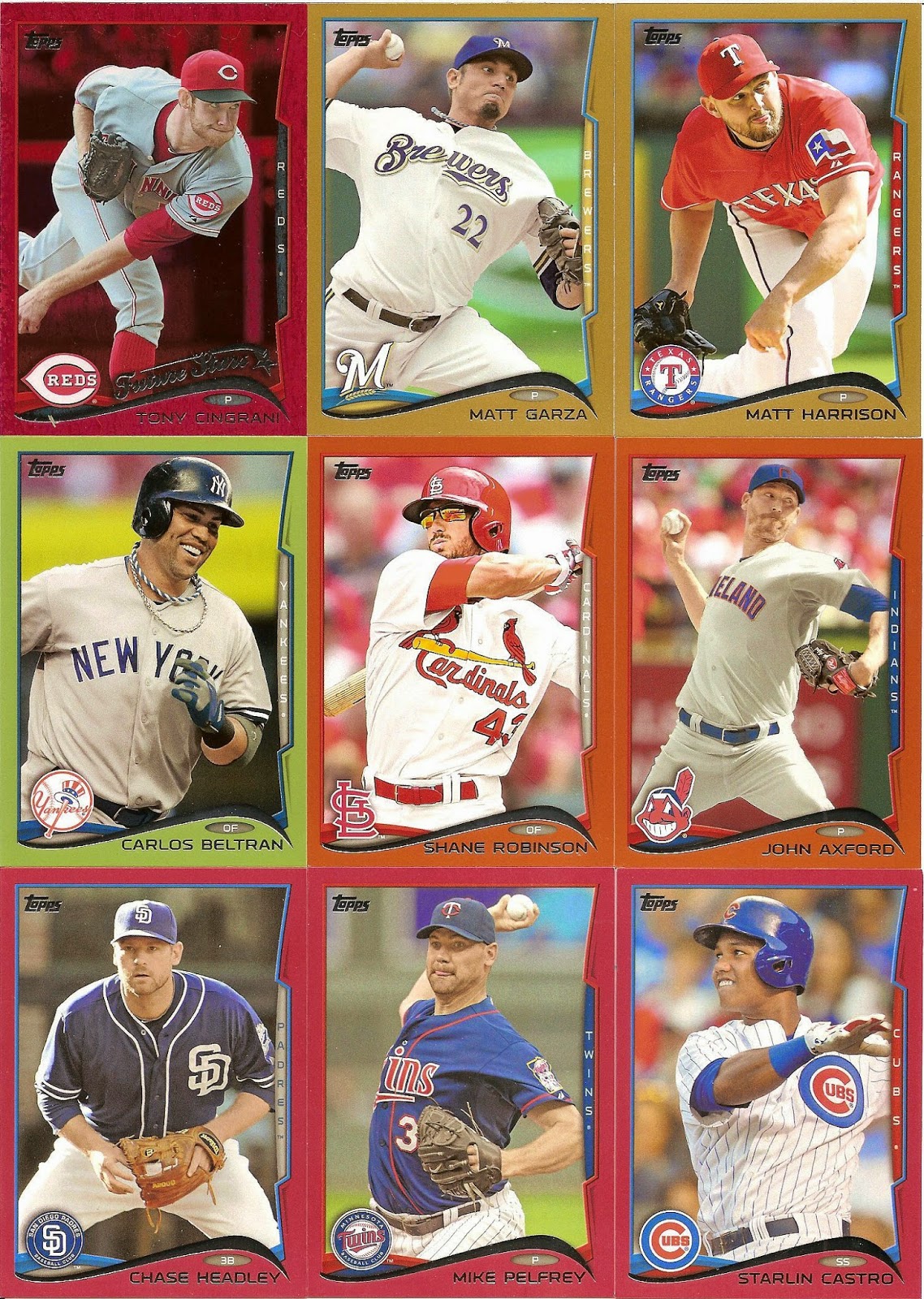 I'm a parallel guy.  I like the idea of parallels.  And I've already spoken of my love for the Slayer parallels.  (I still think a complete set of those would be awesome!)  But I think we've reached the saturation point Topps.  This doesn't even include blue (obviously), black, pink, clear, yellow, camo, purple, and printing plates.  As usual Topps has beat a good idea into the ground. 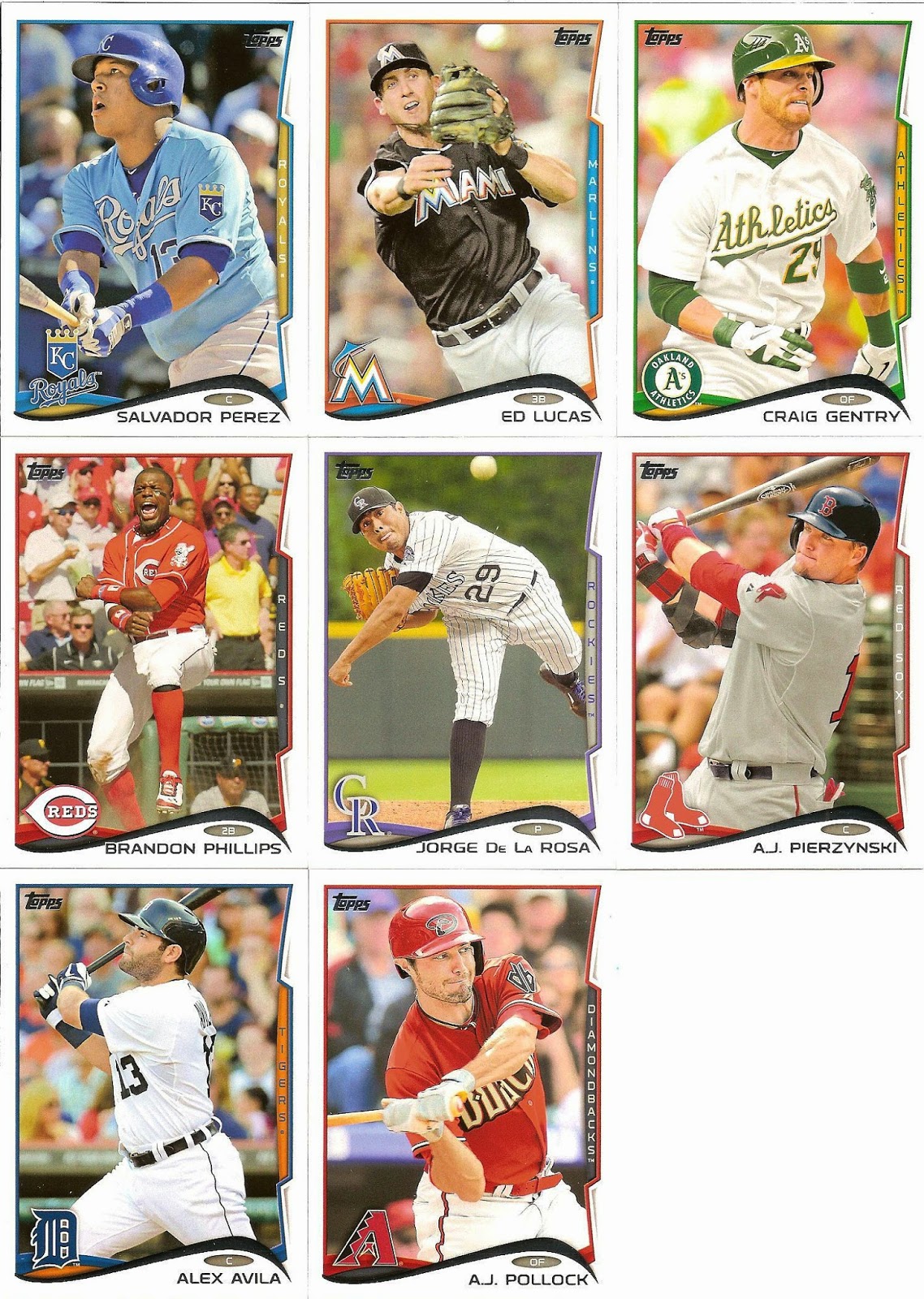 Email ThisBlogThis!Share to TwitterShare to FacebookShare to Pinterest
Labels: 2014 Topps

Where have all the relievers gone?

I have not been posting much at all the last few weeks.  New position, new schedule, blah, blah.  I also really haven't had much to say lately.  Hopefully that's just a phase.

I decided I wanted to do a little research project for myself.  I don't know if anyone will be interested in the results or if they really say anything about Topps' choices for inclusion/exclusion.

I have seen some posts here and there lamenting Topps checklist choices.  I myself had wondered whether relievers specifically were being represented.  So I decided to go back 30 years and compare 2013 Topps with 1983 Topps. 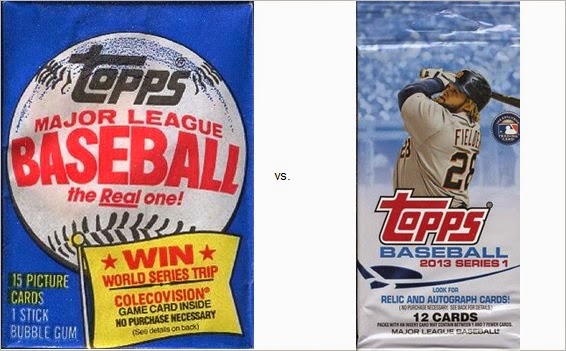 I had assumed that Topps was throwing in extra cards of the star players at the exclusion of role players and lesser known guys.  I wanted to find out if that 2nd or 3rd Mike Trout or Miguel Cabrera in the checklist was costing us a card of another player. 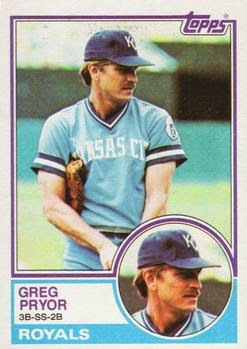 (warning: lots of numbers to follow, proceed at your own risk.) 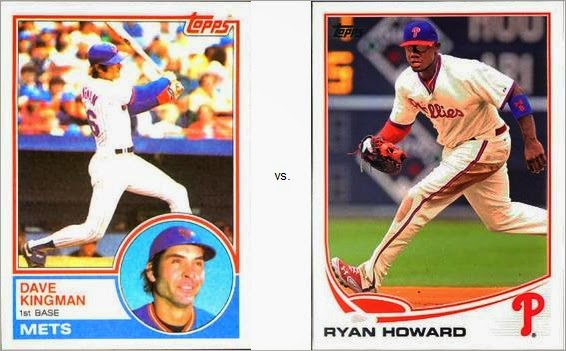 Not much of significance there. Topps seems to be treating first baseman roughly the same. 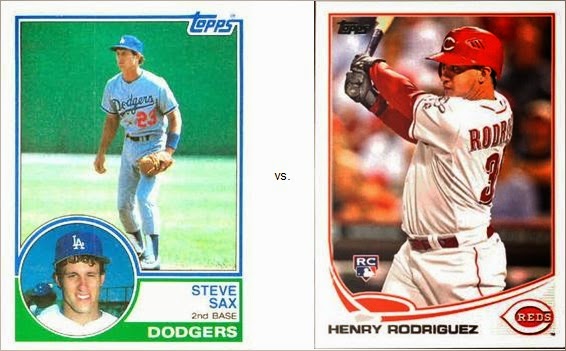 Not much change here either.   Slightly more of the allocation. 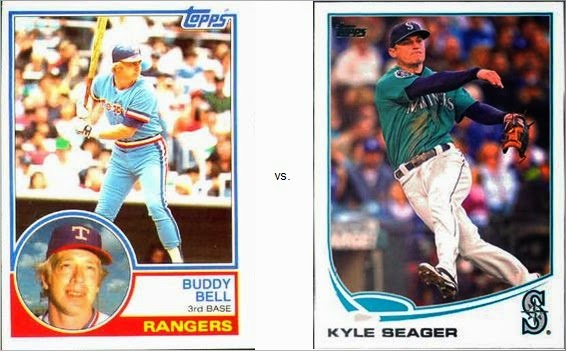 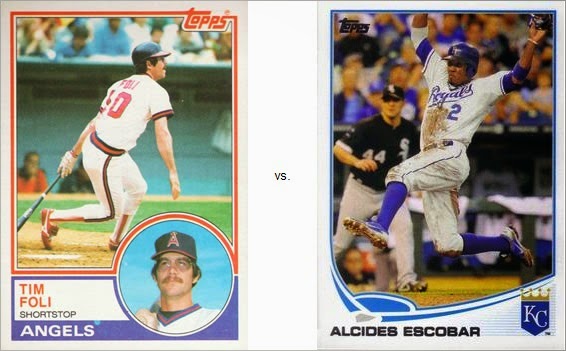 More of the same.  Am I wasting my time?  I guess I should point out here that I went with whatever position Topps listed.  And for multiple position designations in 1983, I used the first position.  Except pitchers.  I had to break them up myself. 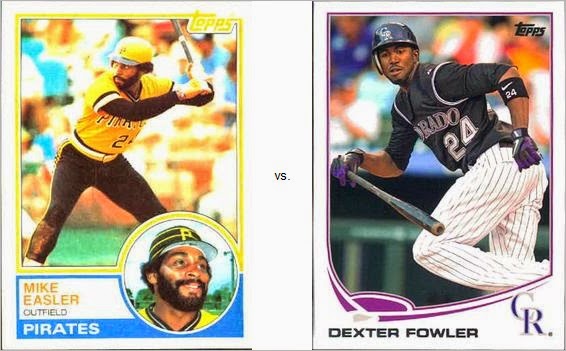 Similar to the first baseman. 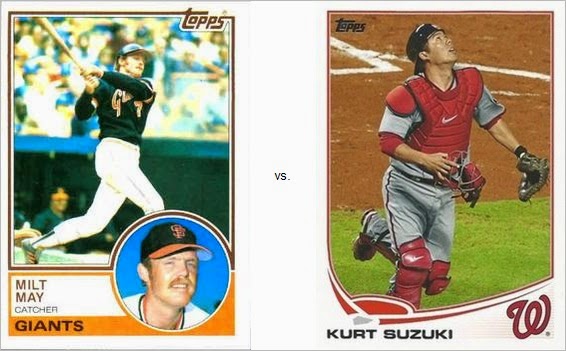 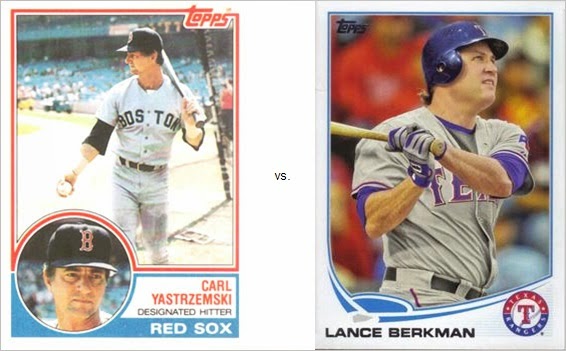 That's a pretty decent drop.  I wonder if Topps is really just assigning a fielding position to players more often than DH in 2013.  Or are there really less DHs roaming the American League? 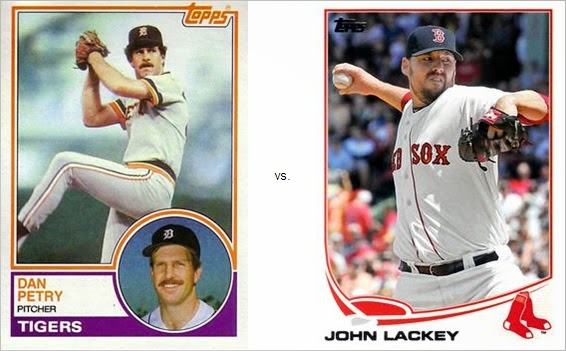 This is maybe the most significant change.  Starting pitchers are the only position that Topps is giving more cards to per team in 2013 than they did in 1983.  So that's a huge jump in allocation. 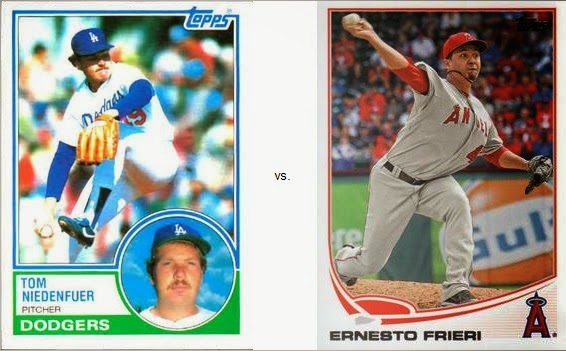 Topps really is giving less love to relief pitchers in 2013, but its not as significant a drop as I had expected.  Although Topps clearly didn't get the memo about the usage patterns of relief pitchers.  Over the last 30 years starting pitchers probably haven't changed much since 5 man rotations were the norm then as now, but clearly more relief pitchers are used in today's game.  10-11 man staffs have given way to 12 or even 13 man staffs.  Those extra 2 pitchers are relievers.  So the drop is more drastic than it looks.  In 1983, there were 5 or 6 relievers on staff at a given time.  In 2013 its more like 7 or 8. 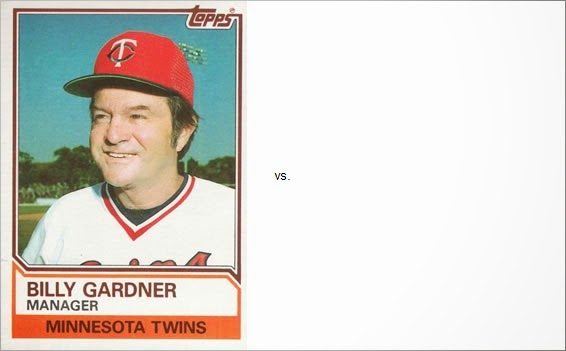 I think most will agree that this is one area that Topps drops the ball.  Who doesn't want managers in the base set?  I sure do.

So, what did we learn?

Not much probably.  We learned that I'm left-brained and I like numbers.  But that's beside the point.