So that just happened 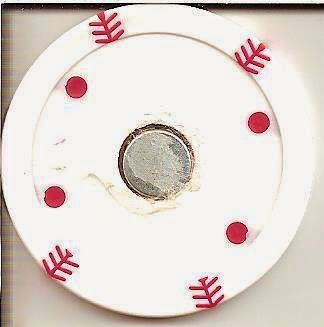 Left a Topps Chipz magnet parallel in my pocket, which then went into the wash.

Everything old is new again

I just came back with the mail today.  And in the mail was a card I won on eBay. 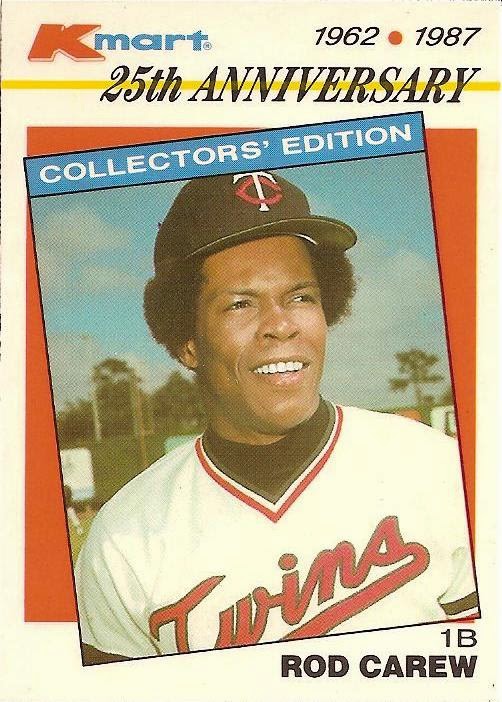 For 43 cents, a new Rod Carew is always a good thing.

But as I was placing him into my Carew binder, I started looking at all my Carew cards (not that there's enough of them. I have plenty of holes).

And I noticed something.

There's plenty of talk in the blogosphere about how Topps uses the same photo for card after card.  And rightly so.

I got a package in the mail about a week and a half ago from Kerry over at Cards on Cards.  I've kinda dragged my feet a little on posting about it for a couple of reasons.  First, the package was pretty big, there were 3 team bags full of cards.  Second, I've been working a bit, and last I've frankly been procrastinating.

But I think the timing has worked out pretty well.  By posting now, I can pimp a contest he just put up.  If you like college football and/or picking bowl games, head over and enter. 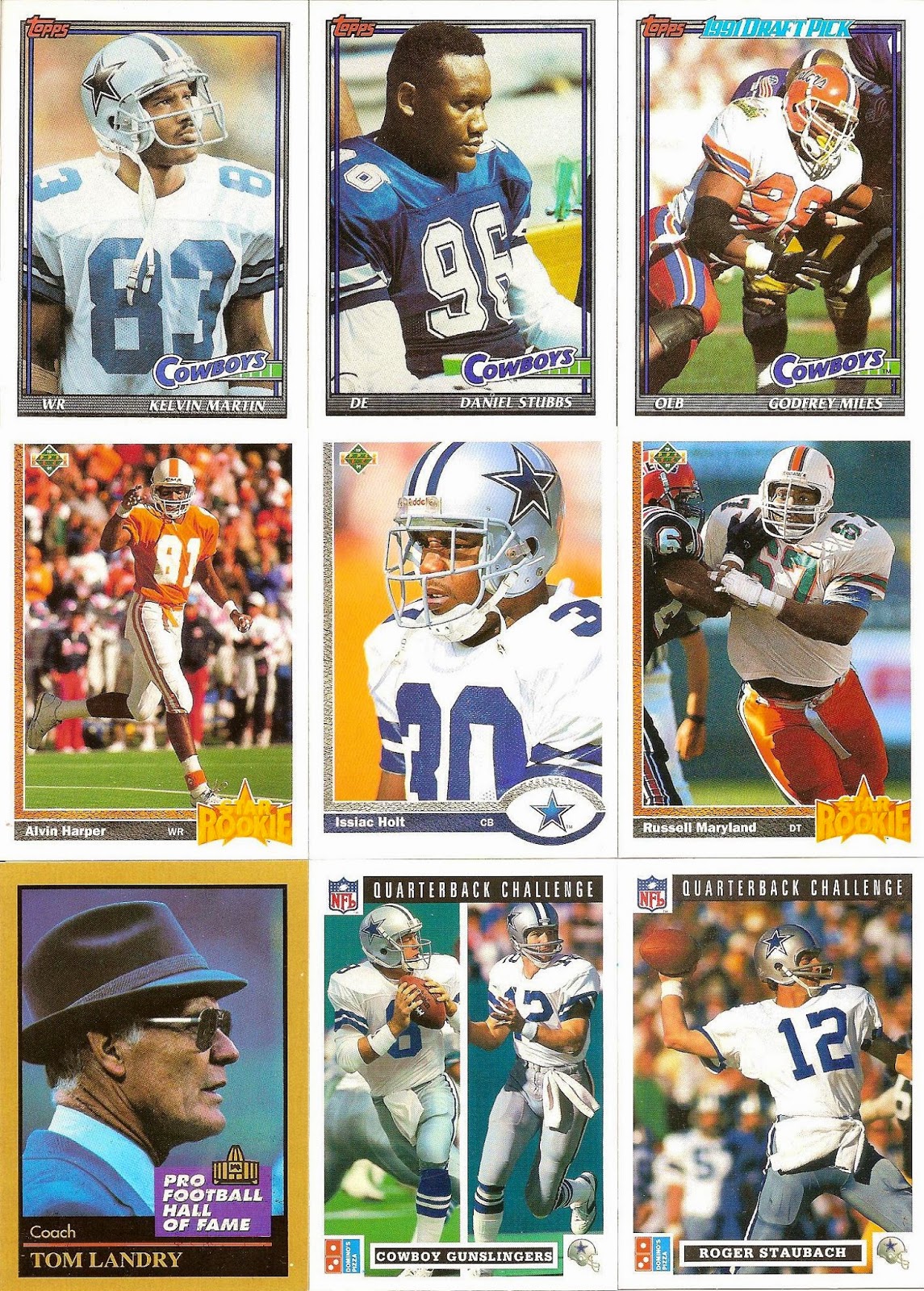 Also, my Cowboys had a huge win last night against a very strong team that quite possibly will turn out to be an elimination game for the two teams involved.  And it was against Kerry's Eagles.  These cards came from a time when I wasn't collecting football cards (and was almost out of baseball cards too), so these will get a happy home.  Is there ever a card of Tom Landry that isn't awesome? 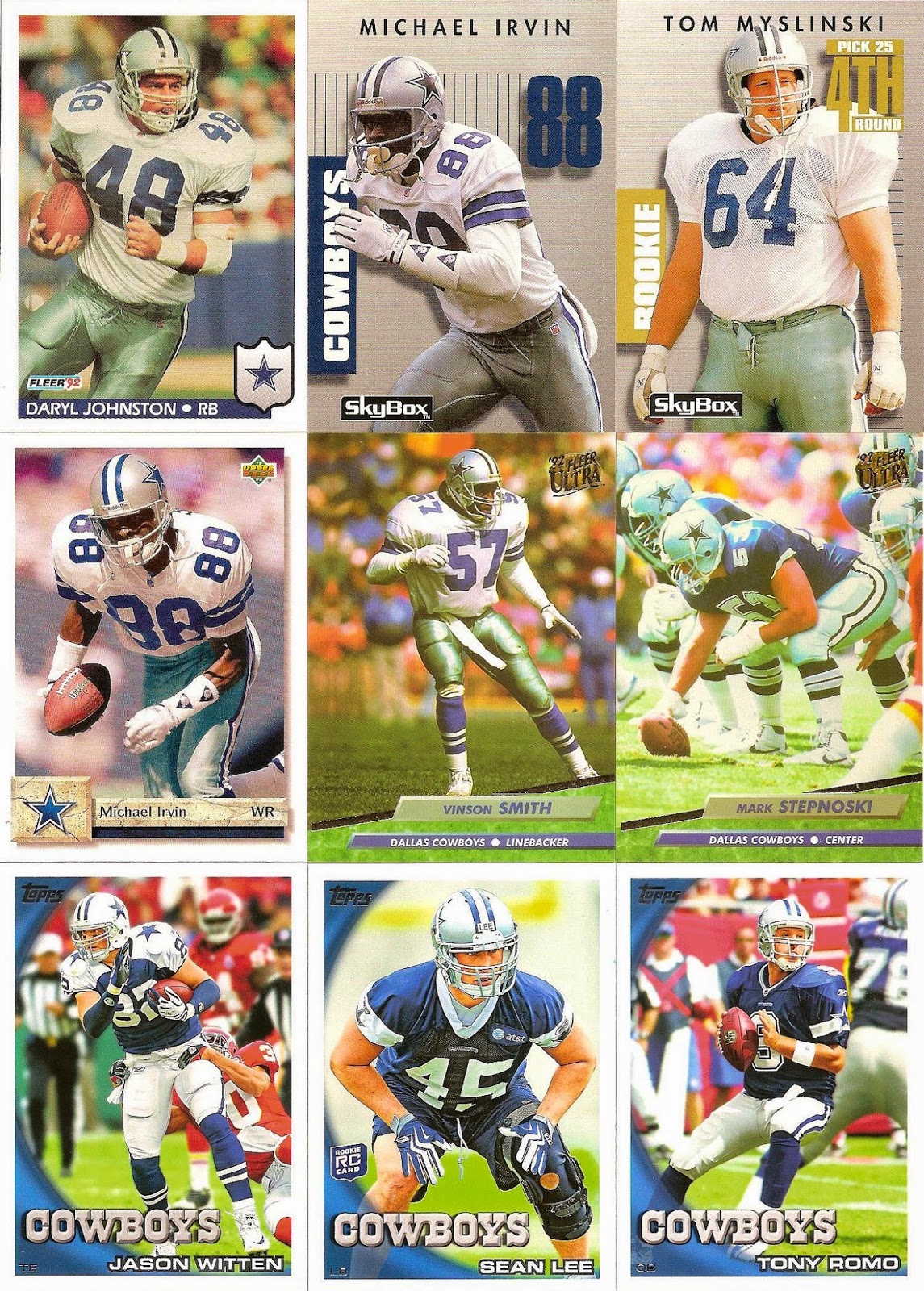 There's some Cowboys from their Super Bowl teams, and some from the current incarnation.  I think the Cowboys showed last night some heart for the first time in years.  Can't say enough how excited I was with the win.

But even though Kerry and I are fans of rival teams, there is always common ground somewhere: 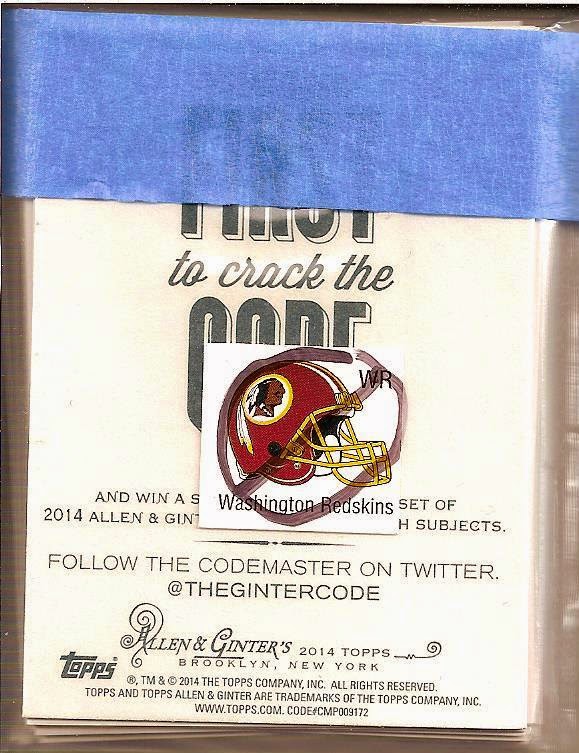 So that was just some of the first team bag.  The other two team bags were roughly themed too. 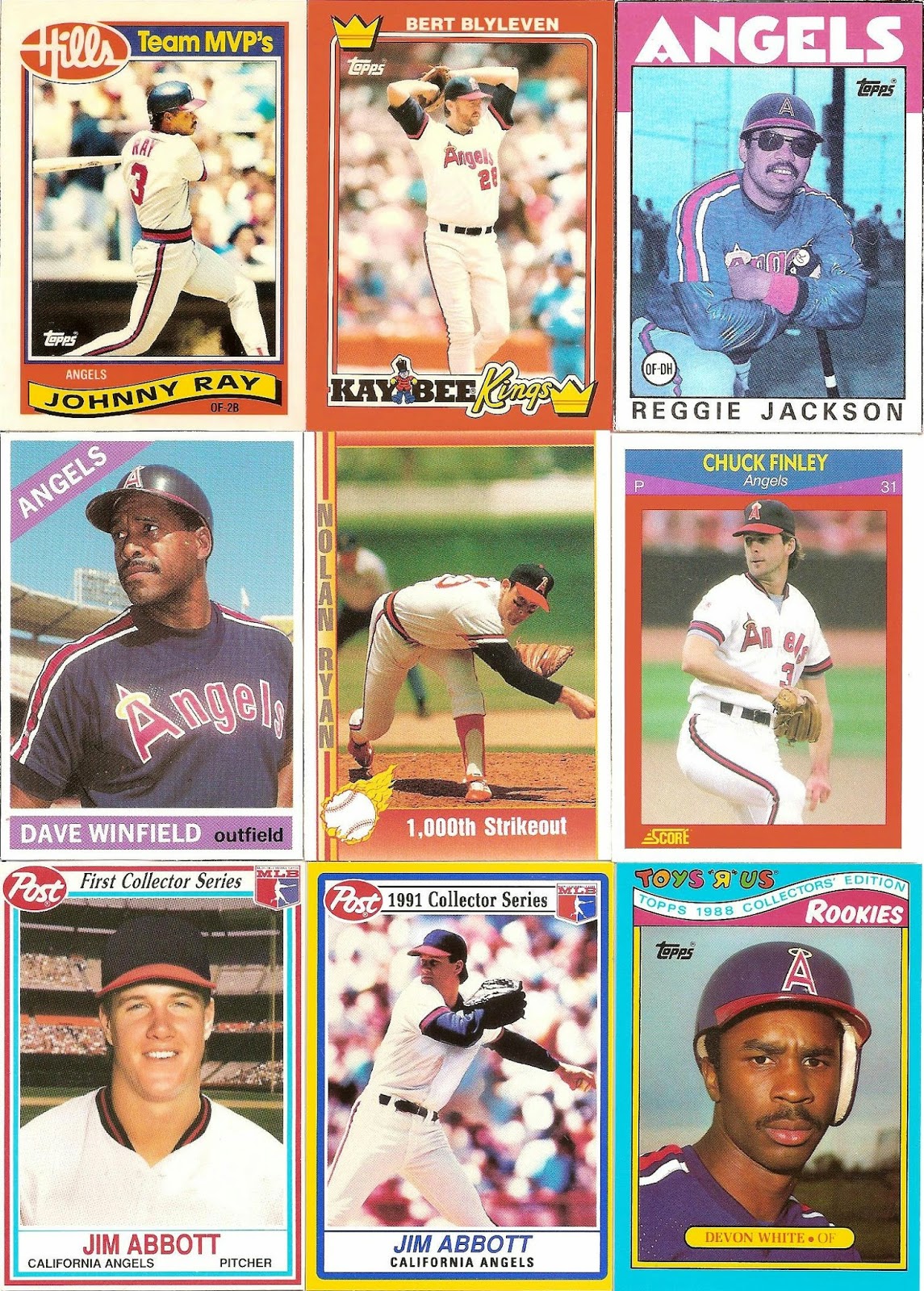 Oddballs.  I actually had all the box bottoms from 1986.  In full panels and cut.  I bought lots of boxes in 1986.  I don't know what happened to them all.  I'd never heard of the Hills Team MVPs set, so that's always a good add.  And another new Ryan for that PC. 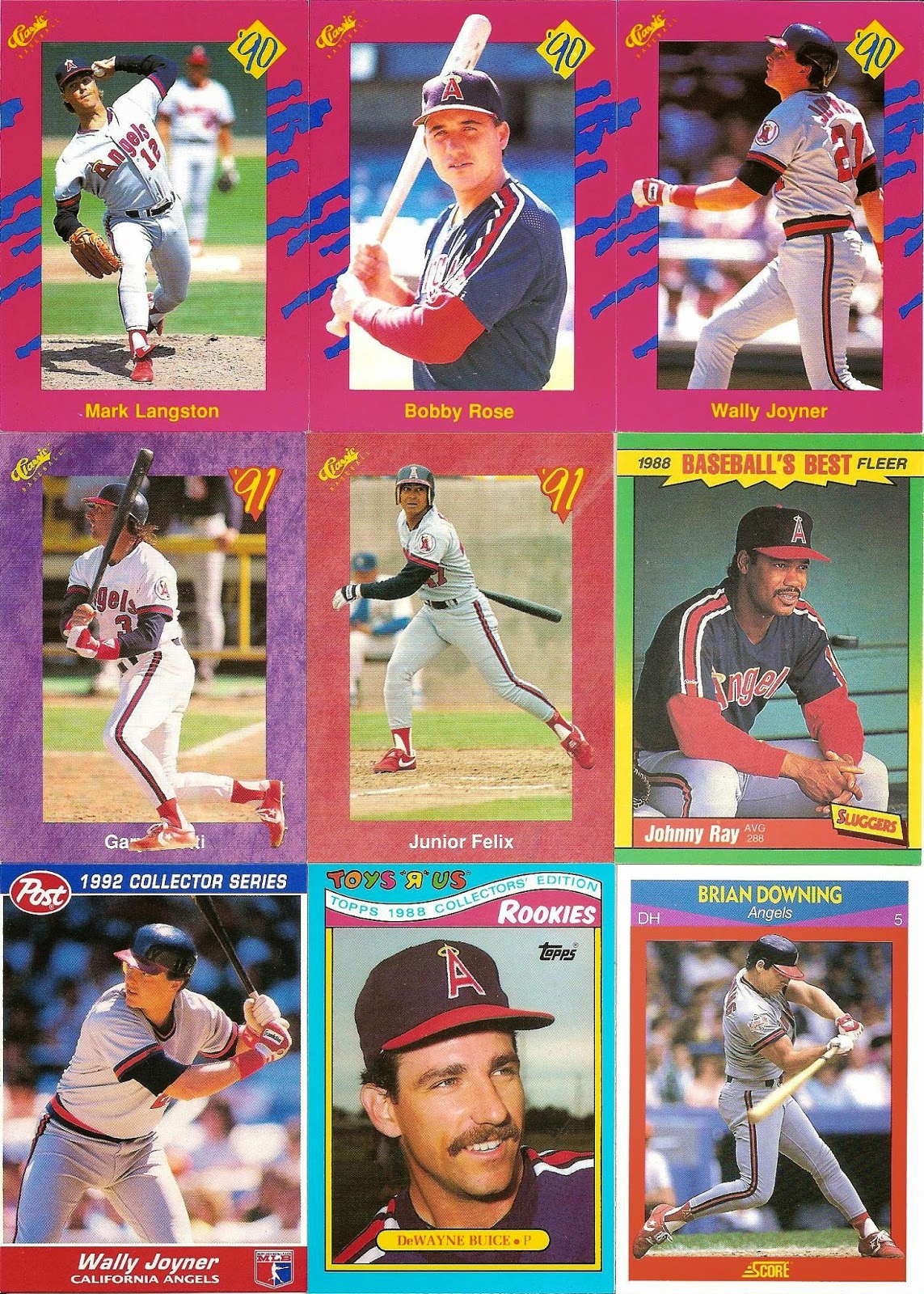 Are the paint splotches supposed to line up like that on the 1990 Classic cards?  We had a Kay-Bee card in the last scan, and a Toys "R" Us card in this one.  And again, this is only part of the "oddball" themed team bag.

The third bag had more Angel goodness for me. 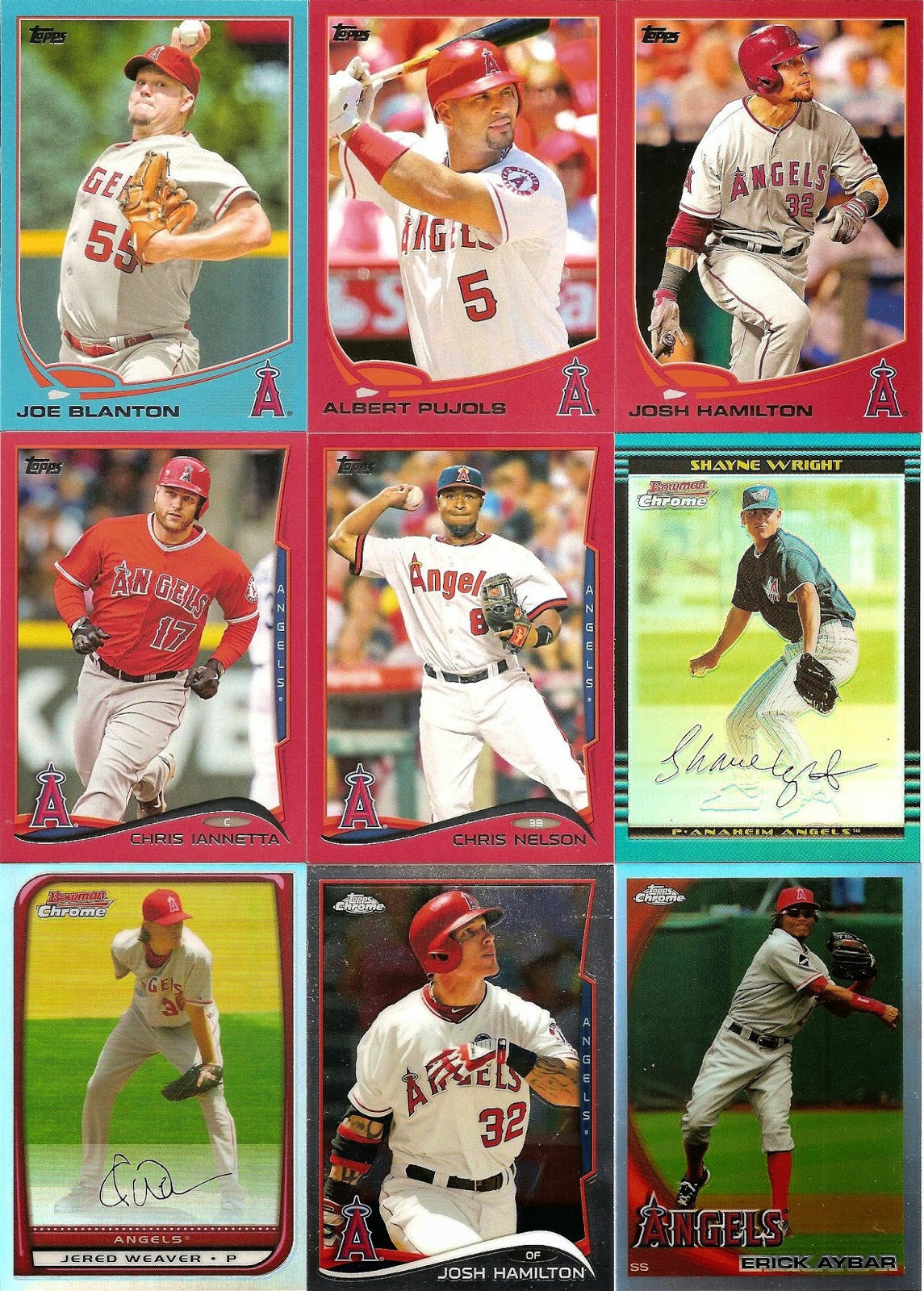 Can't go wrong with parallel Halos.  You've got your overpaid players parallels in the top row and your Chris parallels in the second.  I never buy Chrome, so the generosity of the blogosphere is my main means of acquisition. 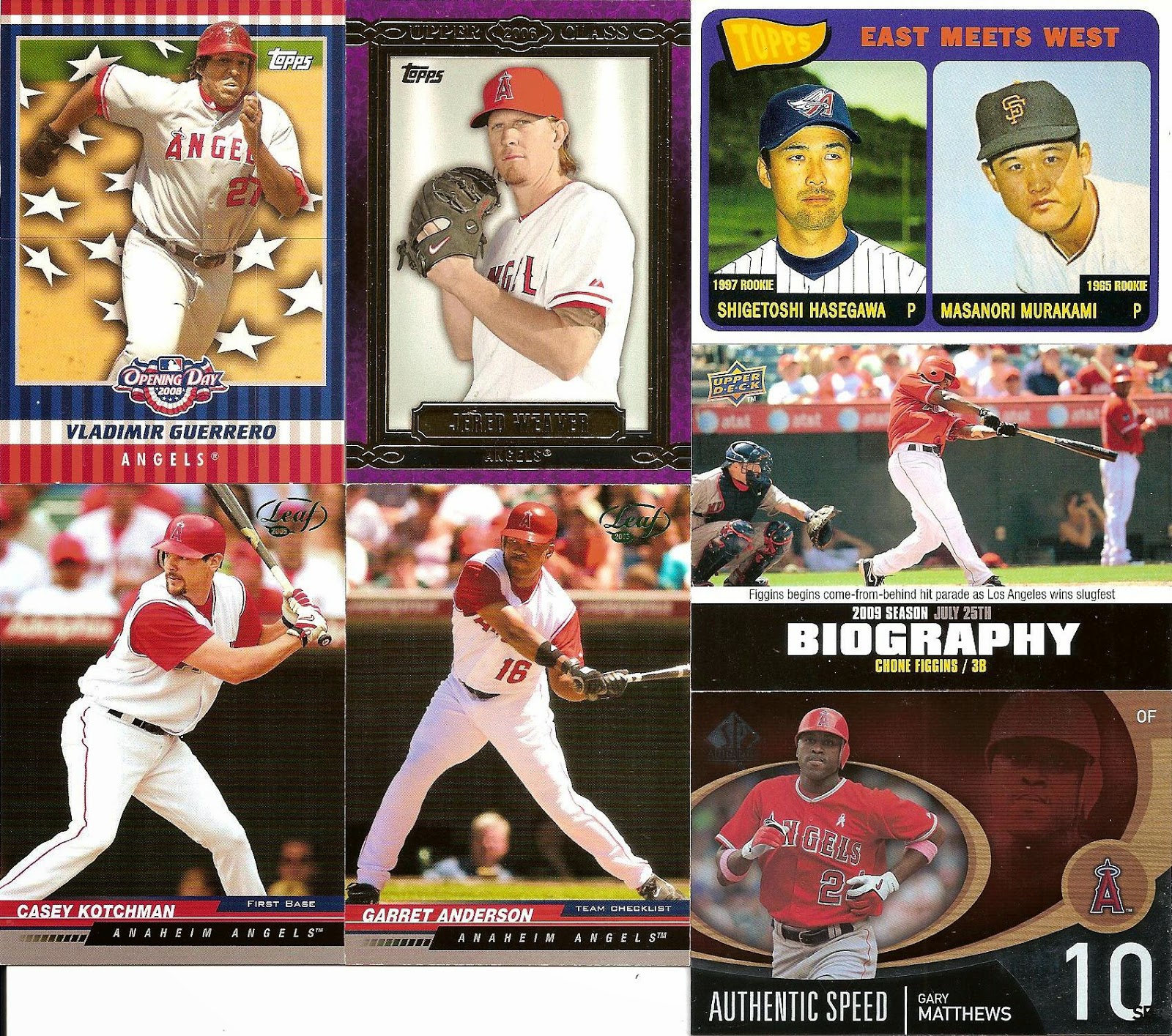 I had to go figure out what that Vlad was.  Its a "Flapper Card" insert from 2008 Opening day.  You can kinda see the perforations in the scan, and it opens up.  I don't think I will open, but I don't know why.  And again, there were many more Angels in the bag.

If I was forced to choose a favorite card though.. 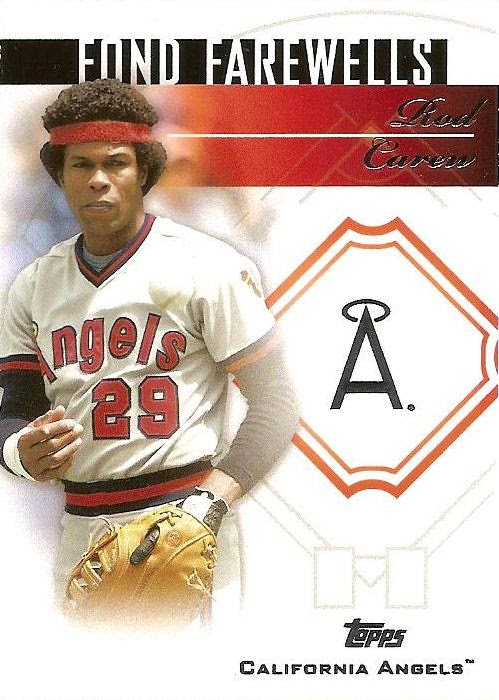 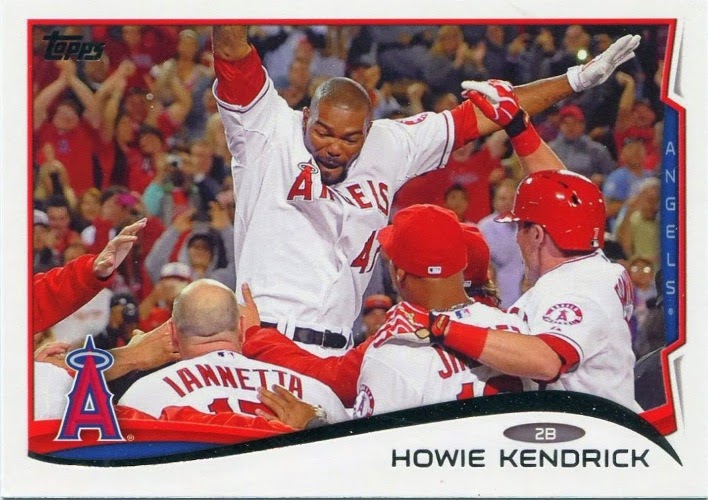 I was a bit surprised by my reaction.  I was kinda upset for a minute.  I did one of those <gasp> "What?" things.

Not long after Kendrick established himself as a regular for the Angels, he seemed (to me at least) to just blend in.  Doesn't seem real excitable, more even keel.  He didn't ever really become the superstar hitter in the lineup, but he was never a problem spot either.

So why was I so surprised?  I don't know.

The more I think about it though, the question I come up with is.. Who's going to play 2nd?  Now you've traded the established starter, what's the plan?  The Angels have been blessed/cursed with too many 1B/DH types in recent years, but middle infielders are a whole different deal. 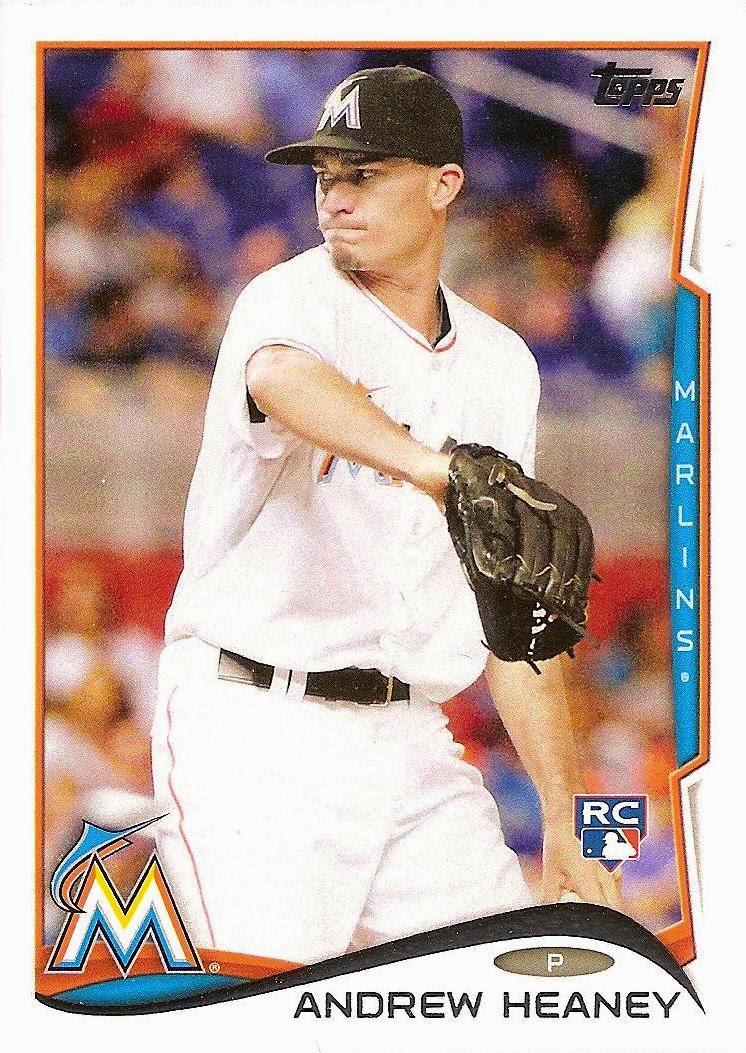 I guess you can never have enough pitching.  Welcome aboard Rookie.

(Edit: When I saw Heaney's twitter post, I became a fan: "Well, @Dodgers we had a good run! Great to be a part of such a storied franchise. #thanksforthememories" That's awesome)

I'll be your excuse too..

The mailman has been good to the house of Junk Wax recently.  I've had a couple of packages come in from generous bloggers and my collection is all the better for it.

Last month Tom over at Waiting 'til Next Year picked up a huge lot of 1984 Topps.  And he was left with 60% of a set.  I knew I had to send some cards to help towards completion.  It's always good to see a post where I can think "I can help!" 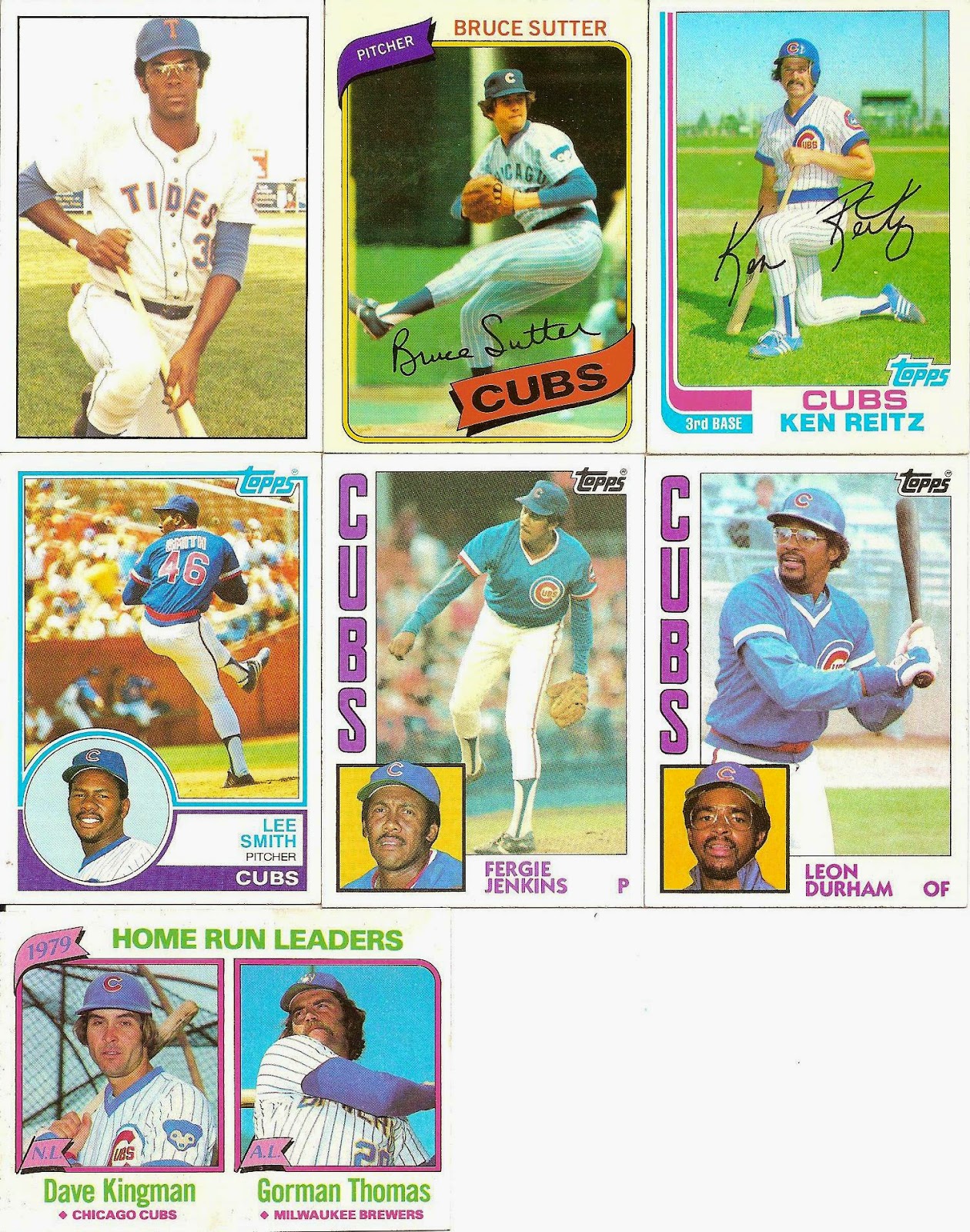 But he didn't stop there.  He sent off some extra Cubs for me to move towards set completion.  Ike Hampton up top there is in a Tidewater Tides uniform, but he was traded to the Angels in March of 75. 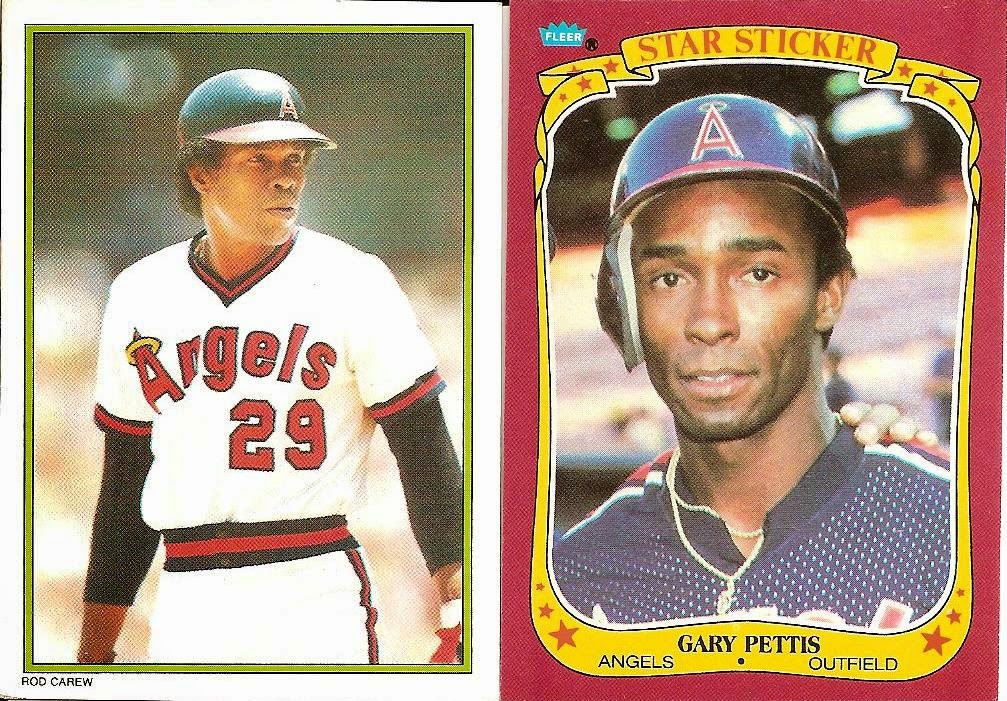 Rod Carew is my oldest PC, but I still have plenty of cards I need.  Here's one of the last from his playing days.  And a Fleer sticker of Gary Pettis?  I'm in. 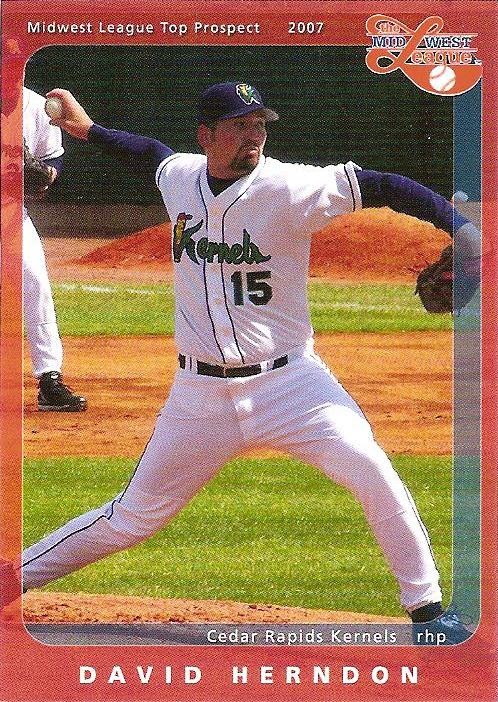 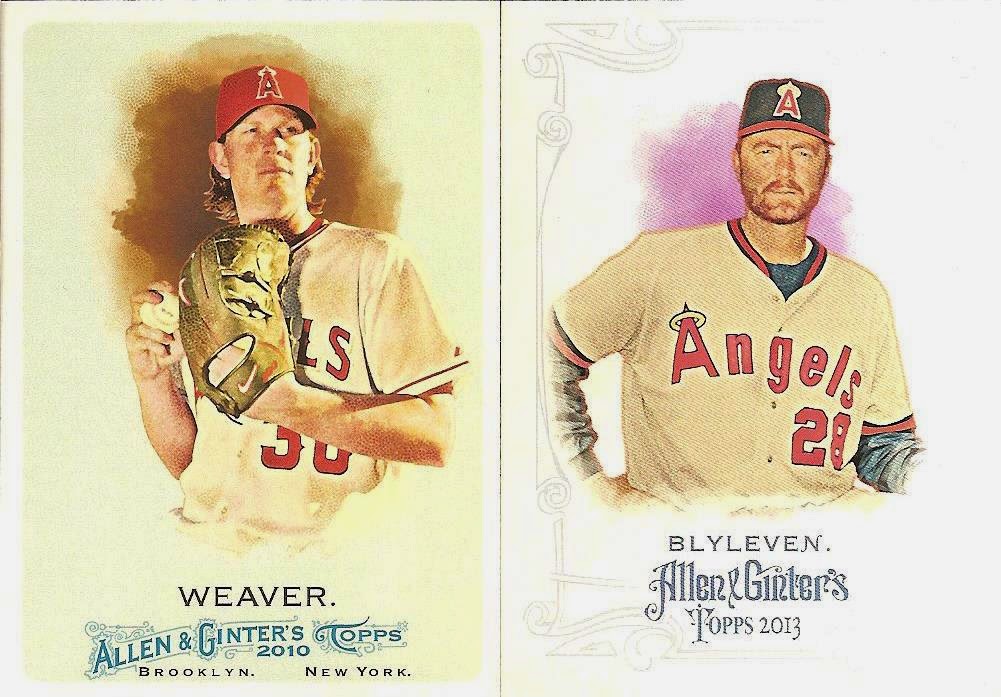 I like Allen & Ginter.  A lot.  But I just can't bring myself to buy it.  I like a little more bang for my buck.  So I rely mainly on the generosity of bloggers to obtain these things. 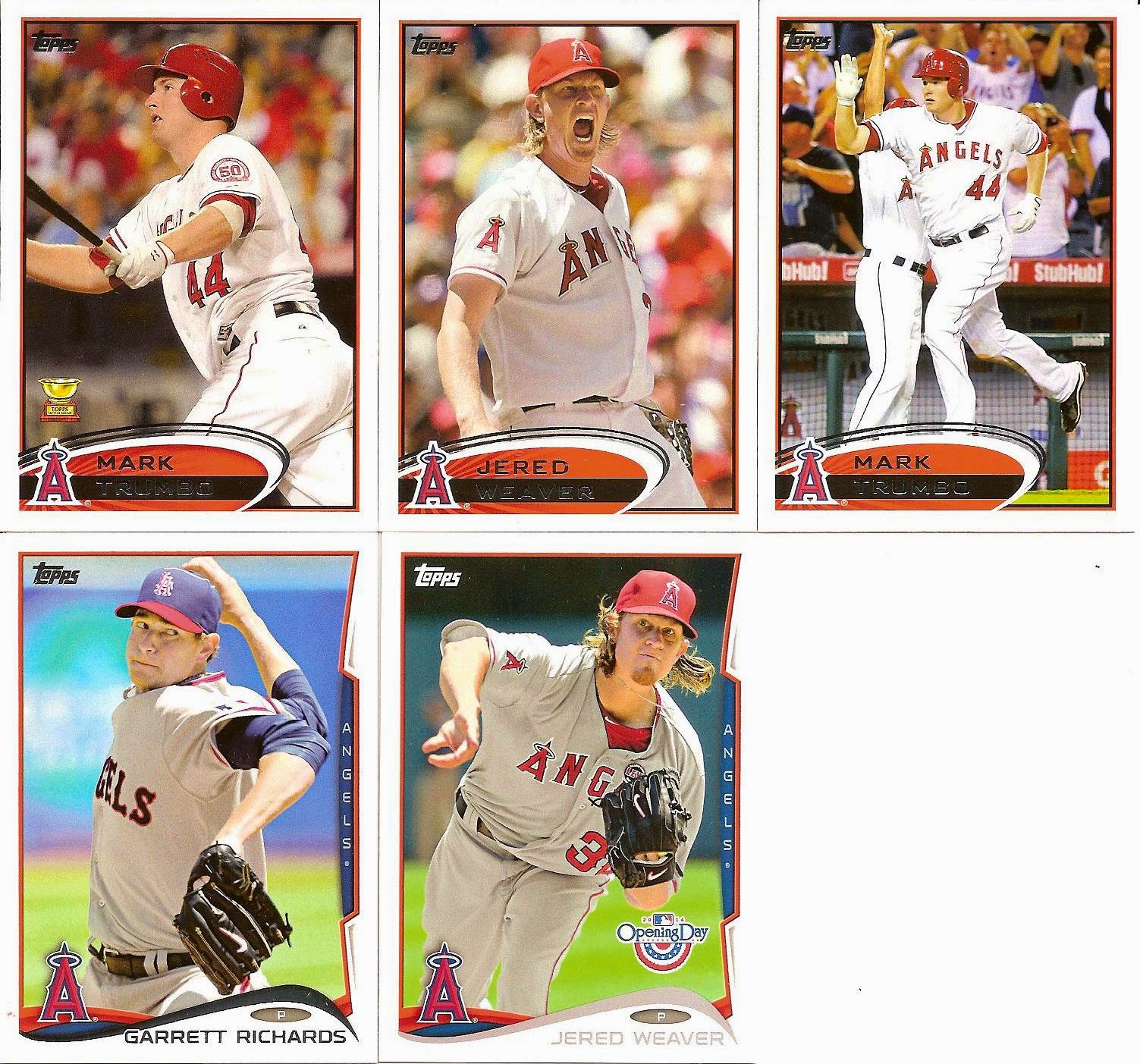 Opening Day is another product I don't buy.  I bought a bunch of it last year, but I just can't justify buying a repeat of base.  One or the other Topps, one or the other.

Pitcher Yency Almonte made it out of Rookie ball in 2014.  But he's only 20, so he still has time.  Oh and his brother has apparently also played in the minor leagues for 8 seasons as an outfielder. 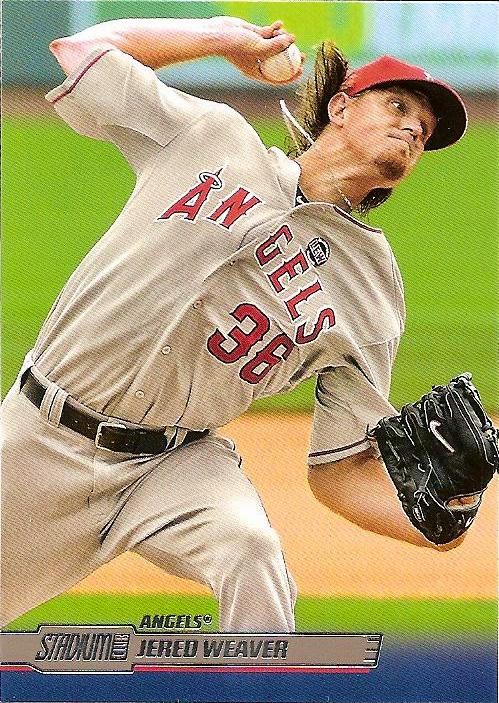 I had already received a Rainbow foil parallel of this card from a group break (although it looks black to me), and now I have the base card to go with it. 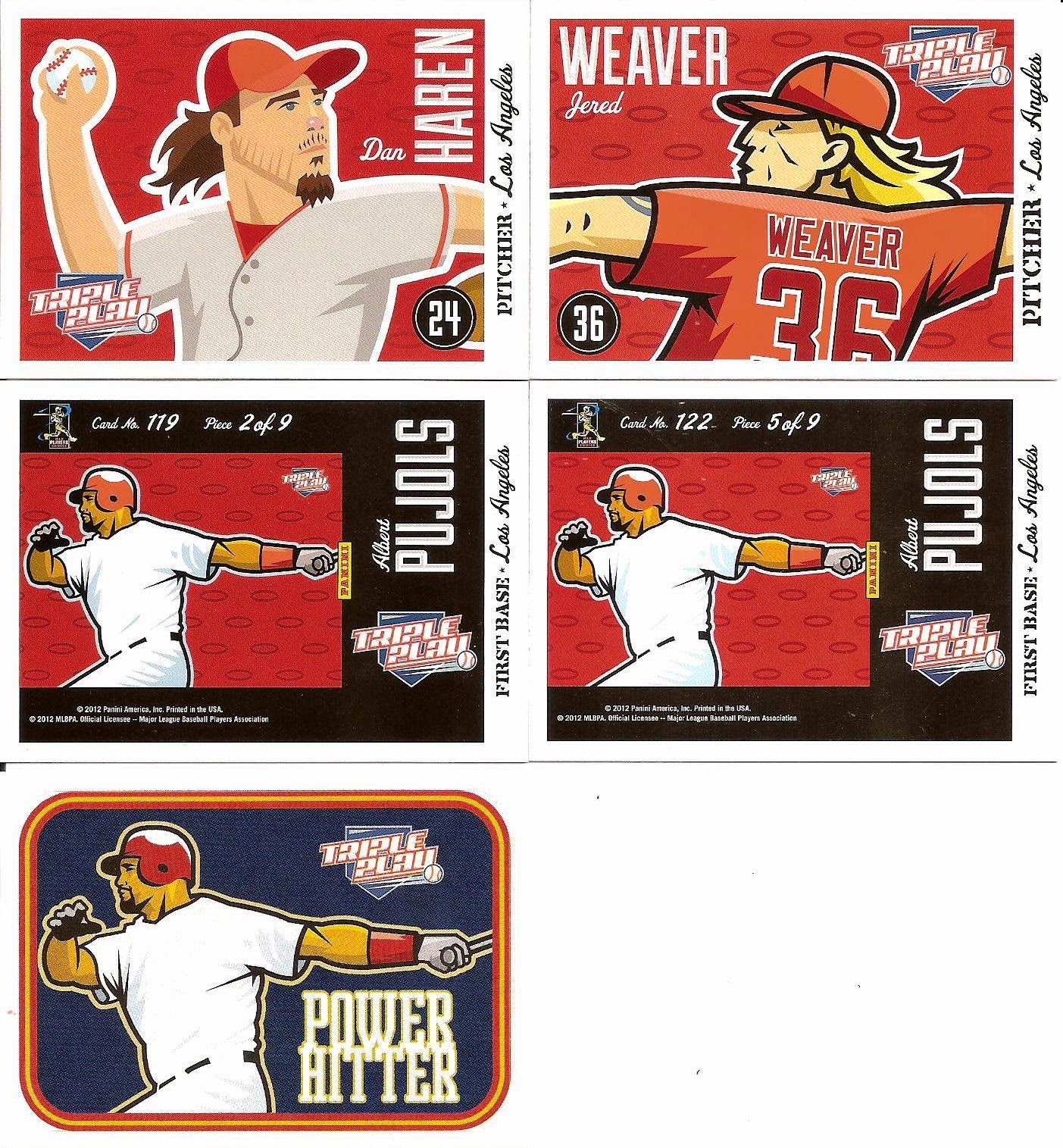 With the exception of Ryan, Panini is getting my cartoon fix all taken care of.  Have I mentioned lately that it would be a good thing to give Panini a license?  Competition is a good thing MLB.

I should say thanks to Tom.  And I truly am grateful.  But the reality is that Tom was just using me as an excuse to head down to his LCS.

I feel so taken advantage of.
Posted by Jeff at 7:06 PM 2 comments:

Email ThisBlogThis!Share to TwitterShare to FacebookShare to Pinterest
Labels: Angels, Waiting 'til Next Year

War of the WARs

I recently read a post on another blog asking if anyone was reading.  Basically should the blogger keep blogging.

See, I think the normal state for bloggers is to post.  And then life may get in the way and force them to stop blogging for a bit, but they'll go back to their normal state.  Posting.

But I'm the opposite.  My normal state is to read blogs.  And then that gets interrupted by me having something to say.

Since I've started this here little blog, I've had the feeling that I wasn't doing it right.  I should be posting more.  But its not like me to say much in real life, so why would I constantly be saying something on the blog?  Gotta be me right?  I think I'll just have to accept that its okay for me to post only when I have something to say.

The only variation I pulled from this year's Topps base was the David Ortiz Sabermetric Stats variation. 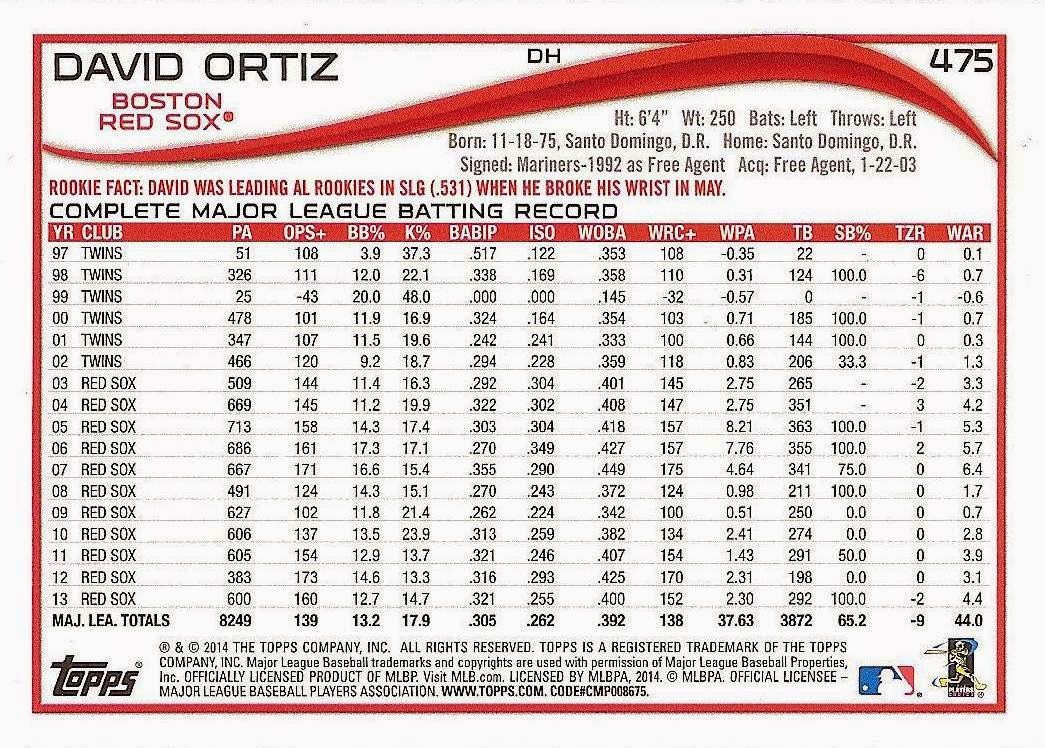 Which is sorta ironic, in that I think the only variation I pulled in 2013 was the David Ortiz photo variation.

Anyway, I recently received the base version of Ortiz..... 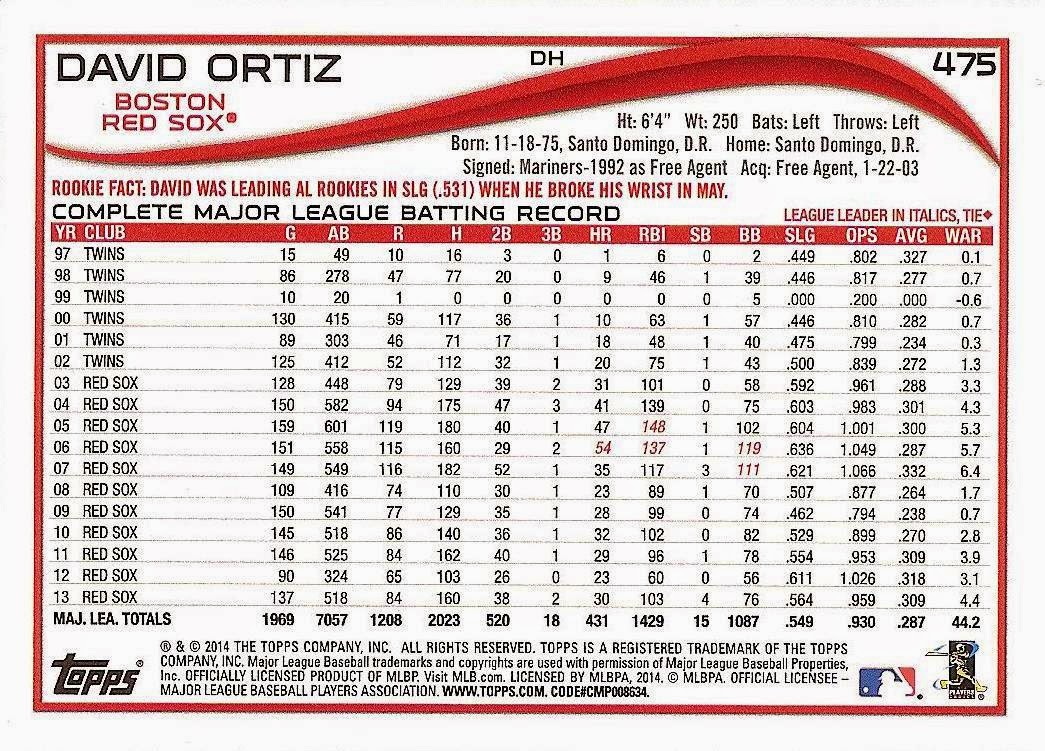 Baseball Reference gives Ortiz different WAR values altogether.  I'm kind of a numbers guy, so while I'm okay with WAR as a concept..
a) I don't like that it compares players to a mythical "replacement player" which then can give a 600 at-bat player less value than a 3 at-bat player, and
b) there are different WAR values depending on who is calculating it and who is reporting it.  So I can't even go look up what the correct WAR values should be.


Guess I had something to say.