You ever like something and haven't a clue why?  You just glom onto something, and it becomes a favorite of some sort.  But there's no real reason for it.

When I first started collecting, I just bought cards and wanted to get as many different ones as possible.  But a couple of years in, I found myself collecting this guy:

I'm not an Indian fan, never have been.  And yet, Franco was one of my first player collections (or what I would later make into player collections).  I still only have a few player collections, and almost all of them have connections to the California/Anaheim/Los Angeles Angels.  Rod Carew, Brian Downing, Nolan Ryan, Dick Schofield, Frank Tanana, Bobby Grich, Bob Boone - all Angels.  And yet, why did I collect Julio Franco??

My favorite set though falls into the "Ever wonder why" category.
That's right, my sentimental favorite set is 1982 Fleer. 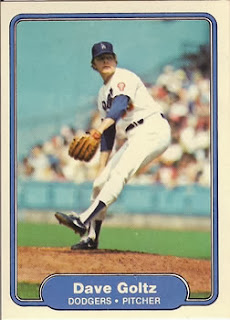 Off center, why did they pick that picture? 1982 Fleer 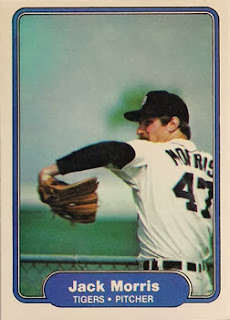 They don't know which way a right hander throws? 1982 Fleer

They used the same photo as Topps? 1982 Fleer 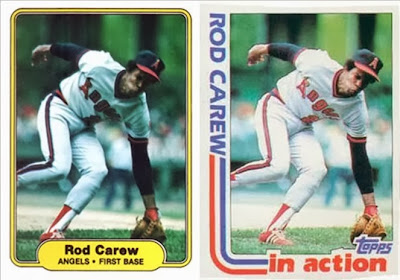 I remember spending the summer at my aunt's apartment and I would somehow get 50 cents (I think it was) and walking down to the Shortstop (I didn't get the connection at the time) and buying a cello pack of 30 cards.  I had bought some Fleer the previous year, but those cards were gone.  1982 Fleer was the first set I ever really collected.  So I guess that is the real reason I love the set so much.  It was my first.  Funny thing is it never was the same after that.  In 1983 we would walk over to the 7-11 (or was it Circle K?) and buy 1983 Donruss.  But it was wax packs, not the cool cello packs from the year before.  In 1984 I got a couple packs of Donruss from the K-Mart, but I didn't really like the design (I'm in the minority, I still really don't).  In 1985 my mom came home with a box Fleer, and to this day I don't know why.  1986 was the first year of mass pack busting.  My stepbrothers and I put together sets of Topps by hand from boxes bought at the Price Club.